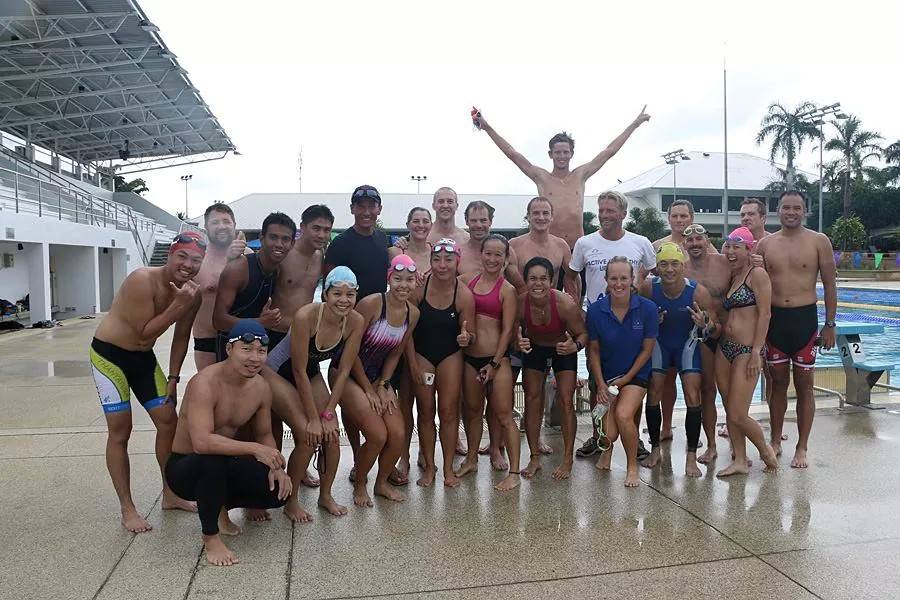 As I wind down and wrap up 2014, I’d like to share with you my top five stories for the year.

Let’s start with the big ones that most of you know. And then later in this post I’ll talk about the ones you don’t know…

I want to talk about this one first because training at that sports resort was something that I wrote about at the beginning of the year as nothing more than a pipe dream. For it to come together like it did was unexpected, but it is one experience I cherish. When else in my life have I been around so many like-minded athletes? Even though we were all of different abilities and goals, we all shared the same passion for sport and life that had led our paths to cross. (And I’m so glad a lot of us are coming back together to race Ironman 70.3 Cebu next year!)

I don’t need to go into detail that the training was amazing and I learned so much. You can take a look back through my blog post series.

This has got to be my biggest achievement in triathlon yet. The distance itself is daunting to think about: 3.8-kilometer swim, 180-kilometer bike, 42-kilometer run. That I had to go and finish it in under 15 hours was an even scarier weight on my mind. And while I was the tail end of the four Filipino finishers (we had an unsung guy who finished after Ani), the mere fact that I was able to be at Challenge Roth this year at all was a huge miracle and blessing in itself. (More on this later.)

I guess there’s not a lot to say that I haven’t already said, except that at this time last year, Roth was just a gleam in my eye, a “What if?” that I was hesitant even to ask for or pray for. I was afraid that I wouldn’t be able to live up to it if I asked for it. That it all happened and I finished has shown me never to be afraid to dream big. Relive my Roth experience.

And now, the Untold Stories…

You may not realize how much is edited out of what I talk about here on KikayRunner.com. I’ve taken you through many of my major high points of the year, but there are so many more stories I don’t write down. Let me take you through my three biggest untold stories of 2014 on the eve of the new year.

I told you about how the woman who took second place on our age group podium at Challenge Philippines had kept leapfrogging me on the bike, goading me into pushing hard on the outbound journey by praising my ability to go up those hills. In the end, she had more left in the tank than I did on the trip back. (She also ended up doing Norseman later that year, so she was the real hardcore deal physically.)

I learned a lot about psy war tactics that day; I’m still not sure she was intentional about it, but I shouldn’t have played into it anyway. But I also had something up my sleeve for other competitors behind me on that Challenge Philippines run course.

Early in the race I had acquired a running partner from a different age group, Chang Hitalia. Because I knew the route was winding and had blind corners, we would speed up to overtake people, then when a corner had hidden us from sight we would ease off the pace slightly. This had the net effect of putting people behind us and at the same time keep them from latching onto us and using us for pacing (“breaking the rubber band”). This worked for the most part until that wide-open last kilometer to the finish, where we were in plain sight. Someone who had stuck behind us very closely put on a sudden burst of speed to overtake us and cross the finish line first. Well, he wasn’t in our age group so I can’t complain. 🙂 Chang and I still managed to snap up a podium place each.

Earlier this year I said that I was going to Challenge Barcelona to attend a MaccaX camp and join the race. A few weeks later I stopped making mention of it, and instead went to the Bintan Triathlon.

That’s because the company that ran Challenge Barcelona was acquired by the World Triathlon Corporation and was turned into an Ironman race. Since we wanted to hold MaccaX camps around Challenge races, this made our camp a no-go.

Meanwhile, I’d also had some trouble registering for the race: my credit card information hadn’t gone through. Talks with the race organizer about integrating the camp with the race and deals for accommodations had also stalled. Looking back I understand now why he was so reticent to deal with us (because he had something else in the works). So when we canceled our camp, it was with minimal losses and I was free to focus my energies on building up for Challenge Roth. I also got to go instead to T*** Supercamp, which proved more useful to me as an athlete.

Bintan Triathlon was a side trip with some good friends and we had such a blast both in Bintan and then in Singapore. As a nice bonus, I scored an age group podium at the Bintan Triathlon, which coincidentally Macca also showed up for.

My Challenge Roth journey was not without its bumps, and one of these bumps was financial. From my initial calculations based on having to stay in Nuremberg and traveling to and from Roth on the train multiple times in the week, the strain on my resources would be considerable. Little did I know, my team had gotten together and raised a considerable sum among themselves to help fund my trip. They gave me these funds during my send-off party, which brought tears to my eyes especially since I didn’t know how to repay their kindness. My teammate Marga looked me in the eye and said, “So now you’re not only racing for yourself, but for us as well. Now you have to finish!”

This was the thought burning in the back of my mind all those 13 hours and 55 minutes I took to finish the race. When I crossed that line, it wasn’t just for me, but for everyone who had helped me get there.

This is for Team Endure

It has been an eventful year, one that has taken me out of my comfort zone and stretched me to my limits. And I’ve realized, there are no limits! I now find myself wondering what 2015 holds for me.

What’s your highlight from 2014, and what are you looking forward to?