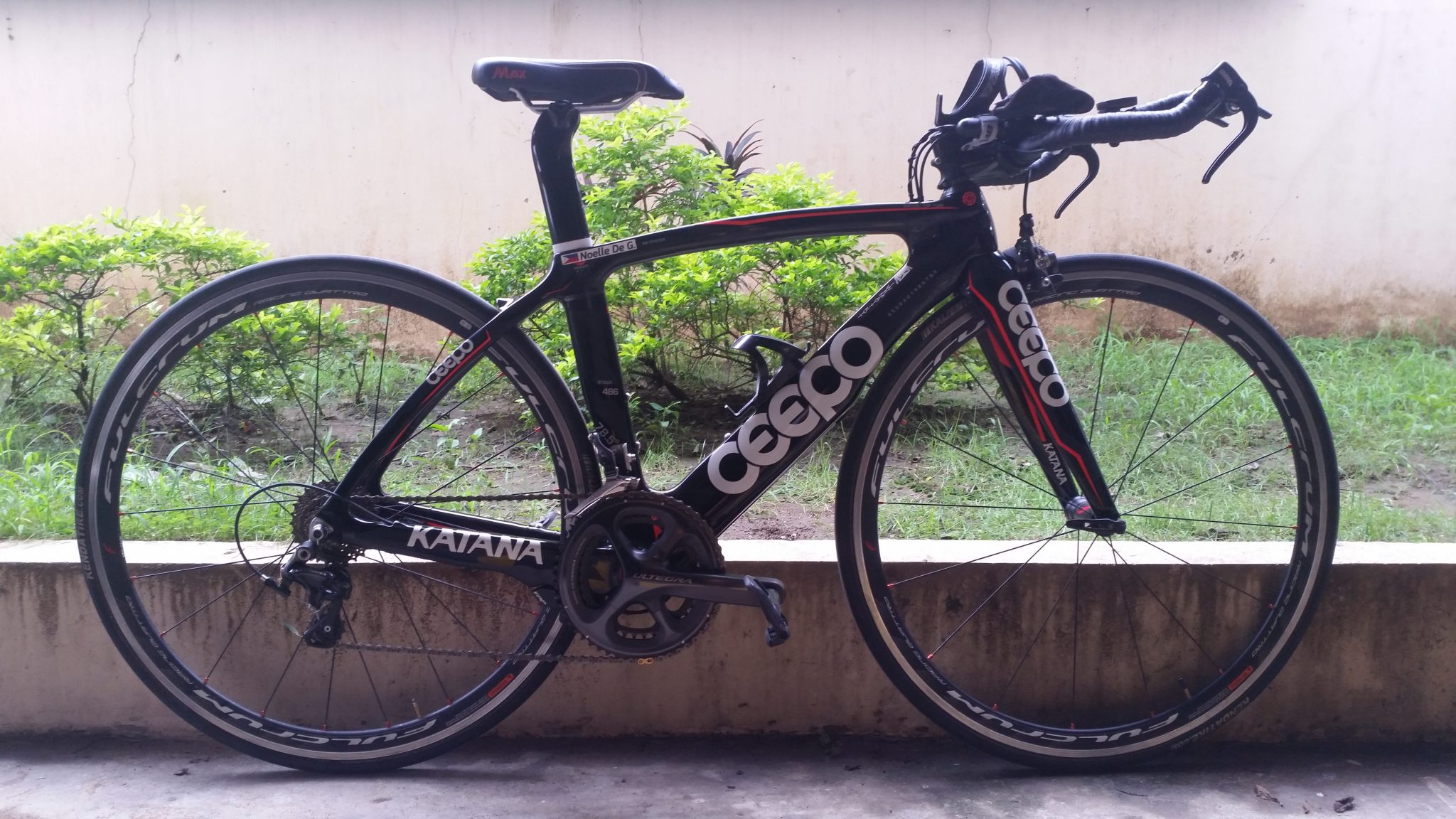 A few weeks ago I told you that thanks to Jerry Santos, the distributor of Ceepo here in the Philippines, I was upgrading my ride from a Mamba frame to something else. I asked you readers to guess which frame I was upgrading to.

The Ceepo Katana is what many of Ceepo’s pro athletes ride, and so it’s been my dream bike since last year. Jerry had a few 2014 Katana frames lying around — the 2015 models have only just been launched in Kona this week, so it’ll take a while for those frames to get here. The only significant difference between the 2014 and 2015 Katana frames are the colorways, integrated top tube bolt bosses (for direct-mount bento box installation), and a QR Code sticker that provides easy identification for athletes in the event of an emergency.

I was able to take my newly-assembled bike for a first spin last weekend at Nuvali. Here’s how I felt riding it:

The new bike, which I’m going to call Aki (a Japanese name meaning “light” or “autumn”, depending on how it’s written), definitely feels a lot different from riding a roadie. The seat angle on the Katana is steeper; in comparison, the Mamba’s is quite slack (although it’s still more aggressive than a pure road bike). This places the rider a bit more forward on the body of the bike relative to the bottom bracket where the crank goes. This allows the rider to get into a more aerodynamic position (depending on flexibility and fitness), which helps minimize drag and speed reduction. Read this article on Triathlete Europe for more about the differences between road and tri bikes.

I definitely felt in much more aggressive position especially on my aerobars last Saturday. However, the new weight distribution on my bike made take sharp corners and U-turns a bit more gingerly than I had on the Mamba previously. However, the Katana is actually quite stable on those turns; it’s the rider that needs to adjust.

I was also able to ride up the steep hill leading to the wakepark quite comfortably, due to the Katana’s weight (or lack of it). I do need to anticipate shifting gears because the shifters are on the aerobars and it can be daunting to take hands off the basebars to shift especially on a tough uphill.

Not many bike manufacturers make tri bikes for shorter girls like me. Ceepo pro triathlete Belinda Granger says (and I agree), “I love it because it fits me like a glove and there are not too many top-of-the-line TT bikes out there that are made for shorter girls like myself. It is a super stiff frame but still exceptionally comfortable. I can stay down on my aero bars for entire 5 hour-plus rides.”

I’m going to take the Katana in for a Retul fitting at Primo Cycles sometime this week to make sure I’ve got the optimal angles on everything to balance power and comfort.

To ride a tri bike with its bar end shifters and forward position takes a lot more concentration and handling skills, so I’m thankful I paid my dues and did my first few years of triathlon on a converted road bike. The Mamba was a pretty solid frame to begin with, and I would recommend it to someone who’s starting to cycle and participate in triathlon because it handles so responsively.

But I do think the Katana will help me level up my performance, especially because it slices through air like a hot knife (sword?!) through butter. Aki baby, this could be the start of a beautiful friendship…

5 thoughts on “First Ride on the Ceepo Katana”