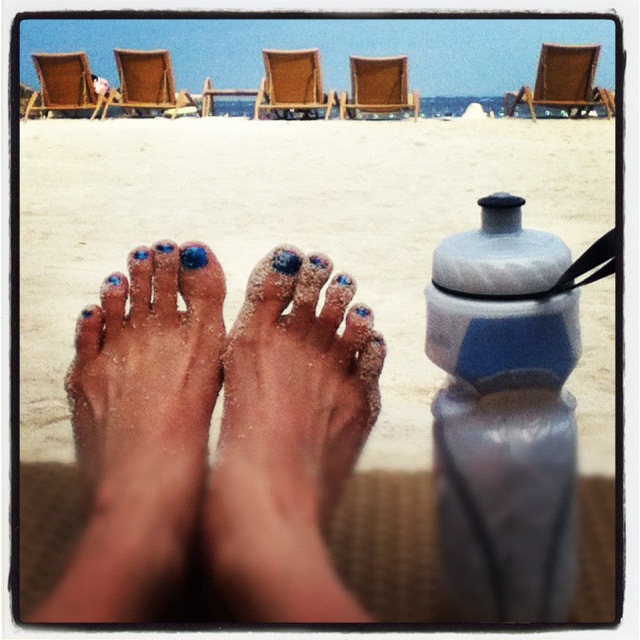 Last Saturday, I was out cycling with some friends and we got off the road at 11:30am because the sun was beating down hard. (Contrast this to three weeks ago, when I was out cycling until 2pm.) Swimmers, like swimjunkie Betsy, have been complaining about the soup-like conditions in our outdoor pools. Then yesterday, I started a long run at 6:30am and it was already hot and sticky.

I don’t recall it being this hot around this time last year — and we hit some record temperature highs late in the summer back then. So more likely than not it’s just going to keep getting warmer through the month of May. How are we athletes expected to keep training in these conditions?

It just makes you want to kick back and chill.

It turns out there’s big benefit in this automatic “heat training” we have in the Philippine summer. In a study conducted at the University of Oregon, they found that cyclists who had done 10 consecutive days of low-intensity rides in hot conditions outperformed a control group in a 60-minute time trial. The gains were similar to the adaptations from altitude training.

According to a Runners’ World article, training and acclimatization in the heat results in changes that make it easier to maintain a faster pace and cause perceived exertion to drop: higher blood plasma volume, increased sweat rate, decrease in salt in sweat, reduced heart rate at a given pace and temperature, and a quicker onset of sweating. These physiological changes also allow athletes to perform better in cooler temperatures. (Also check out this article by Lisa Yates on acclimatizing to the heat.)

I recall two races I did last year: Century 5150 and Ironman 70.3 Philippines. People performed better than expected at these races because they’d been training in the hot summer and then suddenly we had heavy rain the day before the race and cloudy conditions during the race. Personal bests were recorded and broken at these races.

And here’s a real-world example from this year of how our hot Philippine summer benefits us athletes. One of the guys I ran with yesterday did the Challenge Taiwan half a few weeks ago. He said that the temperature was similar to running at night in Manila. Contrast this to the complaints from the pro athletes (who had been training in Taiwan the weeks prior to the race) who said it was so hot!

That said, you still have to make adjustments when training in the heat, for safety reasons. This is to prevent ailments like dehydration and heatstroke.

Drink up. I drink according to thirst, which is why on training runs I always have either a hydration belt or a Simple Hydration water bottle. Sometimes in very hot races I’ll carry a bottle on the course.

with my Simple Hydration bottle at SuBIT 2013

Watch the intensity. It’s a known fact that people run slower on average in hotter conditions. High temperature and humidity increases heart rate and also perceived exertion (how hard a particular exercise feels). So it’s important to pay attention to how you’re feeling when you’re running and not just keep pushing on just because it’s in the training plan to run x kilometers at y pace. Instead, focus on effort and don’t be discouraged if your Garmin is showing slower-than-expected splits. You’re still getting a good training effect.

Recover well. After Saturday’s ride which was shorter than my usual, I ate well, then slept for quite a while in the afternoon. Make sure you take your rest in a well-ventilated, cool room to remove all heat stresses from your body (and prevent heat illness from progressing). Training in the heat really takes a lot out of you so you want those rest periods to be quality. Also, don’t attempt to do all your training in hot conditions. Do night runs, indoor sessions, or maybe get your long runs started before dawn.

Know when to pull the plug. Watch out for signs of heat exhaustion and heat stroke, such as excessive sweating or cessation of sweating, feverish body temperature, dizziness, confusion, and fatigue. Heat illness is not caused by dehydration; it’s when the body fails to self-regulate its core temperature. First aid for heat illness includes cold compresses and cool baths. (This is also why training with a buddy is good, because they can help you out and call for help if you’re incapacitated.)

I think we’re blessed to live in the Philippines, a tropical country without harsh winters. If we make peace with the heat, we can train and race year-round! I think it’s Paradise. 🙂