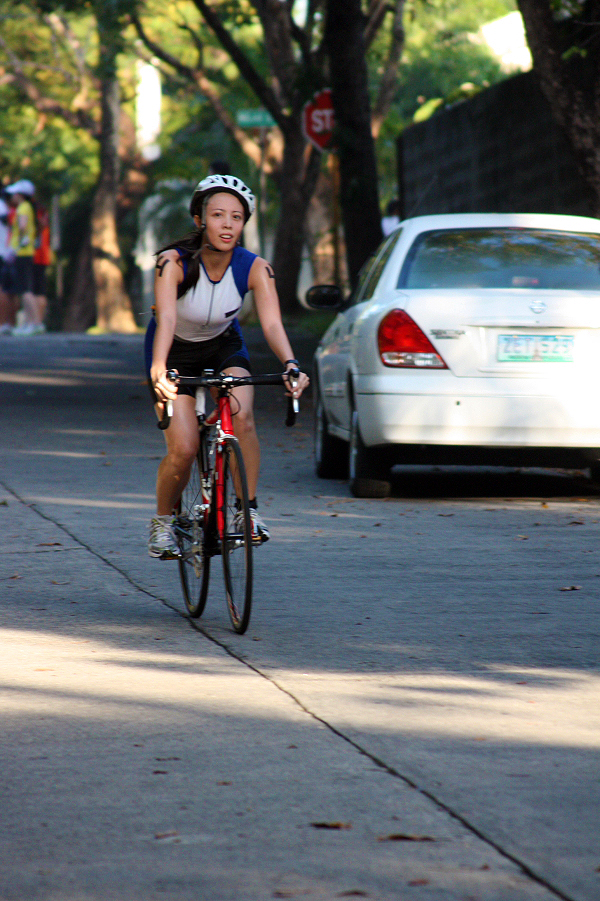 This is a section on my blog where I answer questions people ask me. If you have any questions for future Ask Kikay Runner entries, email me, tweet me, or leave me a message on the Kikay Runner Facebook page.

Triathlon in the Philippines is still a small sport compared to running, but it’s growing due to the influx of runners who, after conquering the longer distances, are looking for a different challenge. Just the other week one of my fellow runners and Twitter buddy @joshtadena bought himself a spiffy tri bike.

On Instagram, I got a question about triathlon. @in1dropofwater asks: I’d like to ask how you approach training for a triathlon. Do you actually do training for all three events at the same time, same day? Or you do it differently? I’m a distance runner… But my dream is to one day do a triathlon.

I frequently get questions about training and how to start doing triathlons. It’s three disciplines instead of one. And how and how much you train changes with how long your goal triathlon race is. And you may also have questions about equipment… For a newbie I understand this can be quite an undertaking!

Even I was a first-timer!

I always say, “How do you eat an elephant steak? One bite at a time.” So let’s break this down so it’s easier to make doing your first triathlon a reality.

Be better prepared than Jillian Michaels at her first triathlon. 😉

Unfortunately your browser does not support IFrames.

What makes someone a triathlete is that they have swum, biked, and run in one event. You may train like a triathlete (swimming, biking, and running as your exercise regimen), but you can’t be called a triathlete if you’ve never completed a triathlon.

So first you have to pick a race that you can prepare for in the time between now and when the race is happening.

Don’t have a bike? If the race is short enough, you can actually do it on a borrowed bike, which is what most triathletes did their first time around. Buying a bike is a big investment and commitment, and you only do that when you’re convinced this is a sport you’d like to do long-term.

Step 2: Assess your strengths and weaknesses.

These are three disciplines, and it is a generally-recognized truth in triathlon that you will be strong in one of them and weak in one of them. So, today, ask yourself: can you swim? Can you ride a bike? Can you run? Can you do these three and complete the race within the cut-off times? Yes, most triathlons have cut-off times for the swim and bike legs and an overall cut-off, unless it’s beginner-friendly like the SBR.ph Tri Series.

Be honest with yourself. If you really want to prepare right, get someone you trust and is more experienced to look at your swim, bike, and run forms. When I joined a team, the more experienced members guided me and pointed me in the right direction to work on my weakness and play to my strength. You can also get a more specific kind of guidance from a coach.

Step 3: Train so you can complete the distance, and enjoy the process.

I had six weeks to prepare for my first triathlon, so I made sure I could swim the required 350 meters by completing the distance in practice. I already knew how to ride a bike, so I just had to familiarize myself with the bike I had borrowed and clock up some saddle time to make sure I could ride 11 kilometers (which now seems so short!). And of course, my strength was the run.

Kuya Kim Atienza once told me that he had signed up for his first half-ironman, the 2012 Cobra Ironman 70.3 in Cebu, without knowing how to swim. But he had a plan: he got a swim coach and over the seven or eight months between registering for the race and the actual race itself, he learned swim technique and built up his fitness.

The number of hours I spend training depends on the distance of the race I’m training for, but my schedule has always looked something like this:

You’ve also got to find a way to enjoy training in each of the disciplines. Whether it’s the feeling of the wind blowing past your body as you coast downhill on a bike, or visualizing yourself as a mermaid or a fish as you swim… This is definitely a time-intensive sport and you don’t want to spend your limited hours doing something you don’t enjoy!

You will definitely have some anxiety about your first race. So get a bunch of your friends to do a simulation. Practice the mass start in a swim (and you will experience the feeling of being in a washing machine), then go through transition and hop on your bike, do a few kilometers and get back to transition, finishing off with a run.

What’s a transition, you say? It’s the area where you switch between swim, bike, and run. It’s also the fourth discipline in triathlon. Check out this video on how to set yourself up for fast and smooth transitions.


What to wear at a race? If you want to keep it simple and not buy a lot of stuff, men can wear swim jammers on the swim and then slip on a singlet with your race number pinned to it for the bike and run. Women can wear swimsuits and then put on a singlet and pair of shorts. This was the topic of an earlier Ask Kikay Runner which you can read here: Multisport Clothing.

If your race has an open-water swim leg and all of your training so far has been done in a pool, it’s worth the effort to head out to a beach resort and swim around their buoy lines. You won’t have the security blanket of being able to see a floor beneath you and a wall ahead of you. An open water practice swim will help calm your nerves and will help you wrap your head around being in open water.

Like I said in Step 1, you need to put the swim, bike, and run together in one race if you want to say you’ve done a triathlon.

You will learn so much about yourself and what you did well and could probably do better at your next race. And I think that’s what makes the journey of triathlon so addictive: each race’s successes and setbacks gives you a new direction to go.

So, when are you doing your first triathlon? And if you’ve already done one, what was the experience like?

14 thoughts on “Ask Kikay Runner: How to Prepare for Your First Triathlon”