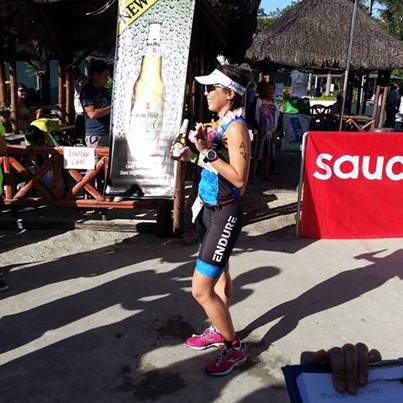 The Subic Invitational Triathlon promised to be a fun short day on the race course. A 1-kilometer swim? Easy. 30-kilometer bike? Piece of cake. 6-kilometer run? No problem.

It wasn’t until I was driving to the race venue, Adventure Beach, the day before the race that I remembered how demanding any course in Subic could be. It was going to be hot and hilly, but as pro triathlete Belinda Granger wrote to me after the race, “They are the best kind of races and the ones we remember the most… have to work for it!” Despite Si3 being marketed as a triathlon for newbies with its short distance and the buddy tri category (where an experienced participant shepherds a new triathlete throughout the course), there were a lot of of drool-worthy bikes racked up and people wearing uniforms from established teams. Got there early, set up transition in the dark!

As I looked around at the competition during the swim warm-up, it just didn’t seem like there were a lot of nervous people.

As for myself, this was my sixth (!!!) triathlon this year, so I’ve pretty much gotten my race day routine down. There wasn’t a lot of uncertainty anymore because I knew I could finish the race on any given day. I was concerned about how well I could deal with conditions and situations out on the race course, and how strong my competition would be. chilly after the “warm-up” swim (photo from Mark Chico) This put me in a good mood.

The swim would be a mass start from the beach. I was unsure where to put myself, so at the last minute I got in the fourth row among the men, and then the gun went off.

It wasn’t a brawl like I expected it to be; I found a nice spot by someone’s feet and hips and just drafted for a bit. The pace was uncomfortably fast, like the interval sessions I’ve done many times before, but nothing I felt I couldn’t handle. To give myself a breather I did four strokes on my back, and then it was back to business. One lap down, one to go.

I came out of the water, saw only men ahead of me, and thought, “I must be one of the first women.” In a slight panic to hold onto that lead, I jumped back into the water aggressively… and promptly got salt water in my goggles. Hahaha! I took a second to let the water out and continued. At this point, the sun had risen by just enough to start getting into my eyes every time I breathed, so it was a big relief to get around the buoys and pull for shore. It was a long run to transition and though I was putting on speed, I was careful not to slip on the cement that still had puddles where the lead competitors had stepped. On went my race belt, sunglasses, helmet, then I wheeled my bike to the mount line. My shoes were already clipped into the pedals and all I needed to do was slip my bare feet into them and start pedaling. This was the first time I was attempting this, and I let out a huge sigh of relief when I got it done properly. Now for those hills. There’s a big climb out of Adventure Beach (according to Strava, it’s a Category 4 climb). Once you get onto Corregidor Road there are even more hills, with gradients from 3% up to 19% — and that 19% gradient is on the way back!

I rode conservatively, spinning up those big hills on light gear, bombing the downhills and flat sections because I knew I could gain a lot of time there with less effort.

As I approached the U-turn of the out-and-back course, I saw race leader August Benedicto coming back with a motorcycle escort. August lives and trains in the Subic area, and is Monica Torres’s training partner and Cobra Ironman 70.3 Philippines 2012 Filipino elite champion, so he’s a great benchmark. I started scoping out the people on his tail. All men. Wait. Was I lead female?

So that’s why a motorcycle had been leapfrogging me all this time! I’d never been in that position before in a triathlon. No way! This was awesome — but I couldn’t celebrate just yet. I still had half my bike ride to go, and then the run would tell me if I’d paced well or gone too hard on the bike. I kept to my race plan and just got up those hills with minimal fatigue. The marshal (my motorcycle shadow) had told me my nearest competition had skidded at the U-turn. I hoped she was okay, but there wasn’t anything I could do other than to complete my race.

If there were any strong women cyclists they would have caught up to me by then, but I rolled into transition still in the lead. I got out onto the run and saw August already on his way in to the finish line. Man! I still had six kilometers to go.

To get to the run course, we’d have to run up the hill we climbed at the start of the bike course, and then turn onto a small road that led into a forest preserve. There was a sharp downhill, and then another long climb. My legs were screaming, my lungs were burning, and there was a voice in my head urging me to back off. “After all, you’ve got a solid lead,” it said. “You could walk for a bit or just jog this and still win.”

NO! I had not trained for hours, days, and weeks for a jogging finish. It would also be disrespectful to my co-competitors who were out there giving it all they had for me not to do the same. Whether I was in first or last place, I was determined to do this race to the best of my abilities.

And so I ran the tree-canopied road past a lookout over Camayan Point (the sea view was amazing!) onto an offroad trail which had been cleared just for this race. The trees provided a lot of shade from the scorching sun, and the air was so fresh it just gave me another energy burst as I ran for home.

It’s an amazing feeling coming down a finish chute with the ocean on one side, palm trees on the other, and a lei and medal at the end. And then to hear the announcer say, “Our first female finisher, number 147… Noelle Frances De Guzman!” Unbelievable. I had a great day.

My Endure teammate Rico Villanueva (Sheerwill) also finished strong, and since we’re signed up for Challenge Philippines, this race was a great taste of things to come since Si3 uses parts of the Challenge course. Si3 also offered 50 discounted slots to Challenge Philippines for its finishers, so if you were on the start list and didn’t come to the race, that’s what you missed out on!

UPDATE: The organizers have emailed me the Subic Invitational Triathlon official results. Check it out! Winners and finishers are listed by age group.

Thank you to Mizuno, Ceepo, Lightwater, yurbuds, and Salice for the support. Team MaccaX and Chris “Macca” McCormack, you keep inspiring me and it keeps me going. Embrace the Suck! (Do check out MX Plus if you’re interested in what kind of training I did to improve my performance.)

Team Endure would like to thank Spyder Philippines, Vibram Five Fingers, and Arena.

Thanks also to The Lighthouse Marina Resort for being my home in Subic over the weekend. Absolutely loved my stay and hope to be back next time!

the suite life at Lighthouse Marina

Thank you Lord for the opportunity to do all this racing at the end of what’s been a mindblowing year. I’m heading off to Phuket this weekend for the Laguna Phuket Triathlon, which also features lots of hills (eeep!). I hope to do very well on Sunday; Si3 was the perfect tune-up race!