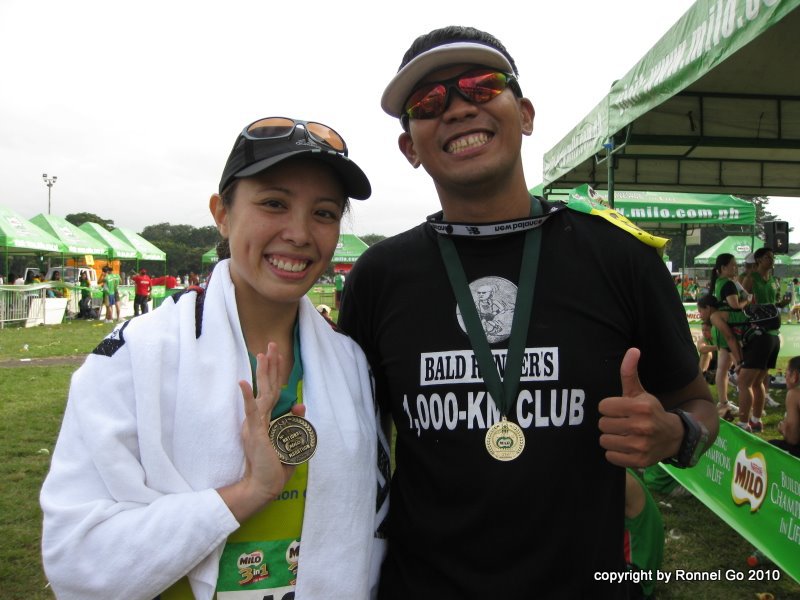 This is a section on my blog where I answer questions people ask me. If you have any questions for future Ask Kikay Runner entries, email me or leave me a message on the Kikay Runner Facebook page.

@jbaggg hi! I didn't follow any formal programs during my 42k training but I did have a structure. I'll blog about it this week. 🙂

I’ve been getting a lot of questions regarding training for long-distance races, which is great because at least people now are taking training for half-marathons and marathons seriously instead of flying by the seat of their pants and taking a “bahala na si Batman” approach to race day.

For myself, when I signed up for my two marathons in 2010, I had some idea of how I was going to go about my training because I’d talked with friends who had already done one or more marathons. I had more than four months to build up mileage, and this gave me wiggle room for trial-and-error.

I will admit that despite my recommendations to train with a coach for proper running form and good progression in running goals, I’m self-coached. I count myself blessed not to have sustained any major injuries in running. I think what makes this a successful strategy for me is that I know my body and how it responds to training.

I realize I may not be the average runner here, but if you’re interested in how I trained for my marathons, here are the four important things I had to do to make it all work.

About marathon pace: I wanted a 4 hour 20 minute finish for my first marathon, so I figured a 6:00min/km pace could get me there with about 8 minutes to spare. I knew this pace was doable because I was already running a 5:00min/km pace at 10-kilometer races, and race time predictors estimated a finish time faster than my goal time. For my second marathon, I trained at a faster pace because I was targeting a sub-4 hour finish.

Have a Good Athletic Base

I’ve been a fitness professional for six years and have put my body through a lot of exercise. I know how it feels to have exercised too much and gotten sick, so I know when to pull back. I also have good body awareness because the fitness programs I teach (BODYJAM, a dance program, and BODYBALANCE, a yoga-Pilates-Tai Chi program) require a good sense of how I position my body from head to toe.

I had a pretty good cardio and conditioning base because I spent about six hours a week teaching (which means performing) these fitness programs. However, I knew I still needed specific training in order to improve running efficiency and to accustom my body to running’s repetitive movement and impact. With all the classes I did, the “crosstraining” didn’t leave a lot of time for run training. On the days that I taught two classes, I’d be too tired to run at all.

I was reasonably confident about my running ability because at that point I had been running race for almost a year. I was consistently running 10K’s, and had already done one 21K before signing up for my first marathon.

I researched marathon training programs, such as the Runner’s World marathon training plans (these were available in the first few issues of Runners’ World Philippines). Unfortunately they required a lot of run sessions (5 days a week), which I couldn’t spare.

I figured that my BODYJAM dance classes, which last one hour each, could be a substitute for the “easy run” days which build aerobic capacity. My BODYBALANCE classes built great core strength, which would help me keep my running form while running.

For running-specific training, my must-do sessions every week would be the speed run and the long run.

My speed runs were on Sundays because I was attending races almost every week. These races gave me a venue to run faster than marathon pace over middle distances, around 10 kilometers each time. These sessions helped me maintain footspeed, which people had warned me I could lose if I did too many long runs slowly. (I set my 10K and 21K PR’s during this time.)

Unlike marathon training plans that scheduled long runs on Sundays, I scheduled my long runs for Thursday mornings. I would run the first half at an aerobic jog at a minute slower per kilometer than my target marathon pace. The second half of the long run, I would increase my pace gradually until I was at marathon pace, which I would hold until the end. I had read somewhere that running at pace during the latter part of the run would train your muscles to stay at that pace even when they’re tired. I also read that taking it slow during the first part of the run would use slow-twitch muscles; although these contract at a slower rate, they are able to keep going for a very long time. This conserved fast-twitch muscles, which tire much faster, for a strong finish kick. I used the long runs to practice nutrition as well; I’d try out gels and sports drinks and see how they affected me.

At certain points during this four-month block of training, I signed up for 21K races, using them as checkpoints to see if my marathon training was paying off. This was at the 4-week mark, and the 8-week mark.

I threw in a third run during the week, a Monday evening easy jog. This was to ease my fears that I wasn’t doing enough running. 😉

Of course, if I felt run down before any of my planned sessions, I would reschedule them on another day of the week. I needed to be flexible about my training because I already was logging a lot of cardio from my classes. Recovery and avoiding getting sick were a priority. I got lots of quality sleep (an unbroken 7 hours every night did wonders for performance), ate well, and took my vitamins religiously. The recovery period between each run session also ensured my body had enough time to repair and get stronger.

So even if I didn’t follow a traditional marathon training plan, I still had a systematic plan that I believed — and, on my second marathon, I knew — would get me to the finish line.

Take charge of your training by doing your research; I enjoy learning, using my best judgment, and experimenting. So it’s not just about the race itself, but about the process of getting there as well. In the end, it’s about training your own abilities smartly, patiently, and consistently.

Want to be inspired to run a marathon? Watch “The Spirit of the Marathon” at 100 Miles Cafe, BGC on September 18.

One thought on “Ask Kikay Runner: How I Trained for a Marathon”