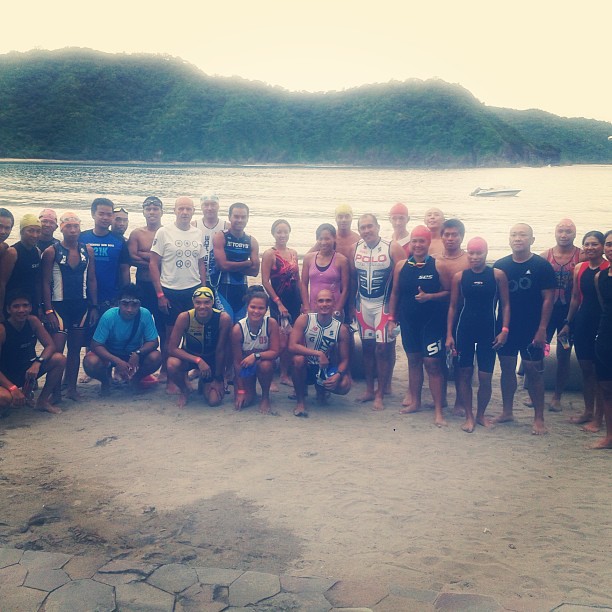 I attended the Pinnacle Camp Weekend at Pico de Loro last Friday to Sunday in preparation for Ironman 70.3 Philippines. It was Leg 3 of an 11-day camp facilitated by coaches Dan and Ani Brown. (Leg 1 began last weekend with lactate, power, and HR zone testing with Zoom In Zones‘ Radek Valenta. Leg 2 was sweat testing and gait analysis conducted by the Gatorade Sports Science Institute and Forward Lean Running.)

My main goal for the camp weekend was to get in some high-volume and high-quality training so that I could approach IM70.3PH with confidence. At Pinnacle Camp weekend, the schedule included an open-water swim (2 to 3 kilometers) on Day 1, a long brick (90-kilometer bike followed by a 1-hour run) on Day 2, and a long run (10 x 2-kilometer intervals at race pace) on Day 3. And you know what? I looked forward to it all.

Even though I was at the Next Step Tri camps at Pico de Loro last year, I shied away from the open water swims. Because I wasn’t targeting long-distance triathlons then, I only did half of the bike and run workouts. I wrote in my account of last year’s IM70.3PH: “…aside from the bike and run disciplines, I really need to work on my swim in order to survive a 70.3. I’m not just talking about strokes; I’m talking open-water swim confidence.”

I arrived on Friday afternoon in time for the first workout: the long open-water swim. I knew from my experience at the Century Tuna 5150 that I was a vastly different swimmer from last year. Most of it was due to the work I did with my swim coach, Nonoy Basa, and the rest of it was me getting over my fear of jellyfish and other sea creatures. So even though the purple flag was up on the beach, meaning there was “dangerous marine life” in the water — jellyfish, sea urchins, and the like — I got in the water anyway. Due to the time of year (prevailing winds and all that), the water wasn’t as flat as we would have liked. It wasn’t the clearest either, with the waves churning up a lot of sand. Still, it was a great way to practice handing rougher conditions. Also, the swim course was set up in such a way that we had to sight left, which simulates IM70.3PH’s counter-clockwise swim.

On my first lap, I swam into some floating seaweed, swatted it away and I was fine. And then I swam into a horde of larval jellyfish! The stinging was prickly but momentary, but I think some of them got stuck in my swimsuit. I kept on swimming anyway, trying to wash them out of my suit. (The next morning, I had red itchy spots all over my chest — an allergic reaction to the stings. It sucks, but as Macca says, “Embrace the Suck”.)

I was on my second lap when my left foot started cramping. As it intensified, I stopped to tread water and attempted to stretch my arch out, to no avail. Instead of panicking, I found the presence of mind to flip onto my back and float. This gave my foot some time to rest, and the cramp went away. There was a safety kayak nearby which started coming toward me when I backfloated. It’s OK, Kuya, I got this.

Day 2 began at 7am on the campers’ request; the Pico Sands Hotel breakfast buffet began at 6am, so this would give some time to “fill up the tank”. So everyone was in pretty good spirits upon meet-up. There’s a really steep uphill out of Pico de Loro, the likes of which we won’t encounter in Cebu (although the Marcelo Fernan Bridge is pretty daunting, too). The rest of the ride was nice and relatively flat and occurred on roads with not too much vehicle traffic. Because I ride on the bike trainer or on Nuvali’s rolling hills most of the time, this was a welcome change and I tackled the 90K with gusto.

Then of course we had to ride back into Pico and go down that steep hill, so I was freaking out because I didn’t want to wipe out and end my race even before it began. Thankfully, my Loki handled beautifully and I got to the bottom of the hill in one piece. My run off the bike felt strong, with no cramping at all. Glenn of Primo Cycles was also at the camp and he asked me how my legs felt. That Retul was the best thing to happen not only for my bike, but also for my run.

What I looked forward to was the run on Day 3. I wasn’t able to join the TAKBO.ph Runfest last week; aside from missing out on reuniting with old running friends, I wasn’t able to dial up my run mileage as much as I should have. The run session of 10 x 2-kilometer intervals with 90 seconds of rest would make up for it nicely — but I needed to have the discipline to hold my pace over those 10 repeats.

Unfortunately, after two full days of swimming, biking, and running, my Ambit2 S was out of juice, and I’d forgotten to pack its charger. I managed to use its stopwatch function for half the session so I was still able to check my splits (I was going around 5 min/km or less). And then my watch died on me. What to do?!

Sometimes we can get overly dependent on our gadgets. For some people this would have been a session spoiler. Instead, I ran on feel for the second half of the session. I used the rhythm of my breath and my feet to keep my foot speed consistent, and based on the pace of the other campers I learned to tell if I was speeding up or slowing down. Don’t get me wrong; the mental fatigue creeps up, and running the same loop over and over again can be quite a grind. At certain points, thoughts cropped up like, “You don’t actually need to complete this run session, right?” And I just answered, “I’m a runner. I’ve run a full marathon non-stop. I can handle 20 kilometers!”

Before I started training for a 70.3, I couldn’t fathom how my body could handle the sort of work it has to put out on race day. But all training is cumulative. Pinnacle Camp was a great way of seeing how my body puts together those months of swimming, biking, and running, and it gave me a peek of what can happen on race day. I’m excited. 🙂 See you in Cebu!