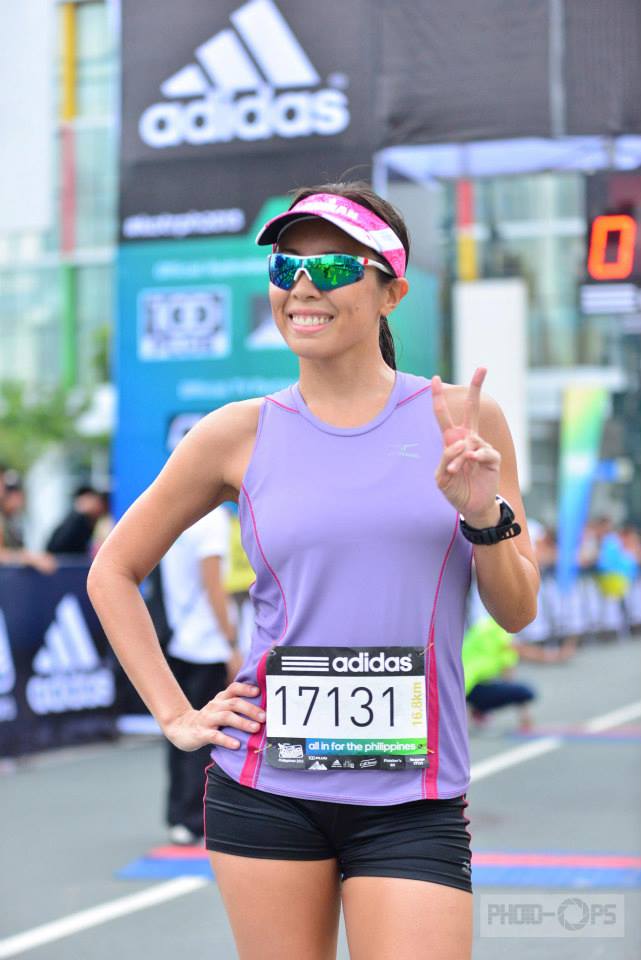 at the adidas King of the Road yesterday

I’ve been thinking back on all the King of the Road races I’ve done in the last few years, and I haven’t done one where I’d done everything right. I was injured last year, unable to register in 2011, undertrained in 2010, and late to the race in 2009! This year’s edition was also under threat due to a phone update gone awry and a leak right over my bed, which robbed me of a good night’s sleep.

I was going to give up and not run the race anymore, but I realized that I would feel so much worse the next day if I missed the race. I reasoned that a finisher medal would make me feel better. So after only an hour’s sleep, I got dressed and made my way to BGC. Well, I made a booboo about a kilometer away from home when I realized I hadn’t brought my race bib. So I went back home to get it.

I arrived just in time for assembly, which was 30 minutes before the 5am gunstart. I was sipping from a bottle of Lightwater most of the time, just trying to hydrate (and because I knew the electrolytes would help keep cramps at bay). My legs were heavy from my 90-kilometer bike ride the day before, but otherwise I felt fine, not even sleepy. I may not have felt sleepy, but I looked it!

The gun went off, and I started at a pace of around 5 minutes per kilometer. There were a lot of “rabbits” in the pack setting a blistering pace, and if all I had to go on was perceived exertion and the people around me, I could count on a painful home stretch later on. I was glad to have the Suunto Ambit 2S on my wrist as it would help me keep a constant pace and not burn out early.

It was a pleasant first few kilometers; I was breathing through my nose (a sign that it was an aerobic, sustainable effort), found my cadence, and passed the rabbits. In fact, I felt so good that my pace crept up to about 4:30 min/km in some parts. By then I was fully warmed up and had taken my nutrition already, so I just let loose. This took me to the 10-kilometer mark in 49 minutes. That was also the turnaround on Buendia which would take us home.

I had counted the number of women who were on their way back and knew I wasn’t going to take a place on the podium, but that didn’t matter so much to me as being able to finish the race strong. By kilometer 13, my legs were tiring, and my “comfortable” pace was hovering around 5:05 min/km. I could hear some men behind me talking about keeping up with me.

I started to push the pace past “comfortable” into “uncomfortable” territory and was surprised to find my body was able to hold on. Sure, my calves were hurting, but I had no sign of cramps. I could feel my body’s temperature rising (and quickly grabbed a bottle of water from the aid station to douse myself), but I wasn’t snatching at my breath. And I found myself running at the same speed on the last two kilometers as I did in the first ten. Unbelievable. I am so thankful I didn’t allow myself to talk myself out of doing the race. It would have been so easy… I could have stayed at home and sulked — but would have nothing but regrets. Instead, I discovered that my body could switch to that kind of pace even under fatigue, I had a great experience out on the course with my fellow KOTR participants, and I have a nice shiny finisher’s medal to show for it all. (Also, I finished among the top 20 women. Pretty cool!)

Now I’m convinced that our patterns of thinking can get in our way of doing what we excel at. Especially in endurance sports (but I’ve seen it in the gym classes I teach too), we frequently give up even though physically we can continue. If we can get over ourselves and give our best effort, we may surprise ourselves.

I had a great experience at Adidas King of the Road 2013. It gave me the opportunity to push my limits and I’m glad I was able to race it. I’ll give it a FIVE KIKAY PINKIE FINGERS out of FIVE.