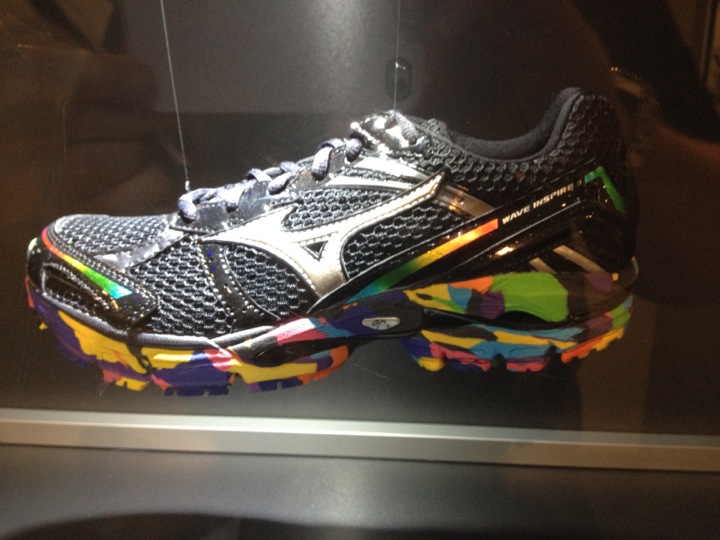 Reading all the Condura Skyway Marathon tweets and Facebook posts from yesterday made me wistful about my own two-time marathon experience from 2010. It has been a while! Although I’ve taken a detour to multisport in the past two years, I have been actively looking for my next marathon, and for a while now I’ve wanted to do an international one.

What city considers a billboard of a running man an icon?

At the Mizuno BE launch last year, I heard Coach Patrick Joson and his Jumpstart students talk about their experience running the Osaka Marathon. If you went shoe-shopping at Mizuno last year, you might have noticed some Osaka Marathon commemorative shoes.

We didn’t get this colorway, though.

For most or all of Coach Pat’s students, it was their first marathon. What an experience the Philippine delegates had! Aside from the marathon itself (of which Mizuno is an official sponsor), they also were given a tour of the Mizuno manufacturing plant and even met the guy who handcrafts shoes for Mizuno’s elite athletes.

I was supposed to run the Osaka Marathon in 2011 along with Coach Pat, but we each got badly injured. I hope this year, I get to do it. I’ve always been fascinated with Japan’s love affair with long-distance running. The first Olympic marathon event I watched on TV was the women’s marathon, and I marveled at how the petite Japanese runner could somehow keep up with the long-legged Africans and Europeans.

Here in the Philippines, motorists still honk in annoyance when they come across runners. But in Japan, running is way more mainstream. Thousands of people lined the streets to offer support and cheers during the Osaka Marathon, and thousands more joined it.

Well, Osaka is one of Japan’s major cities; it is historically the commercial center and was once called “the nation’s kitchen” because it was the center of the rice trade in the Edo period.

Osaka is 19th among the world’s leading cities and is home to some of Japan’s major electronics companies. Osaka is also a cultural center, known for the National Bunraku Theatre where traditional puppet plays are staged, and Kabuki and Noh plays.

Osaka’s also got some pretty distinctive architecture, like the Umeda Sky Building which is two towers topped by a floating garden observatory, Dotonbori Street with its bright and mechanized neon signs, and the Osaka Dome which hosts baseball games (another Japanese sport obsession). Osaka Castle, which is one of Japan’s most famous castles. The castle park is the starting area for the marathon.

I think it would be lovely to explore this city on foot. Check out this sneak peek at the sights at the Osaka Marathon!

modern and historical alongside each other

Why the Osaka Marathon?

The Osaka Marathon was first held in 2011 as a charity event which aimed to raise funds for seven charities represented by seven colors — red for reforestation, orange for disabled athletes, yellow for chronically ill children, green for cancer support, light blue for community beautification, navy for education in developing Asian countries, and purple for clean drinking water. However, 2011 was the same year that an earthquake hit the east coast of Japan, triggering a tsunami which caused not only damage and death along the coastline, but also nuclear plant meltdowns that affected the evacuation zones and hundreds of thousands of residents. The Osaka Marathon Secretariat designated a “0th color” combining all seven colors to represent charity efforts for tsunami recovery.

The Osaka Marathon is accredited by the Association of International Marathons and Distance Races (AIMS), which means you can use your finish time from this marathon to try to qualify for Boston — not that I’m planning to. Aside from the full marathon, there’s also an 8.8-kilometer challenge run. Did you know that there were 28,000 marathon runners at the 2012 Osaka Marathon?

That’s a lot of people running a full marathon!

The charity aspect of the marathon as well as the huge number of marathoners participating makes me want to be part of the Osaka Marathon. Hopefully, this becomes reality this year!

How about you? What’s your dream international marathon?