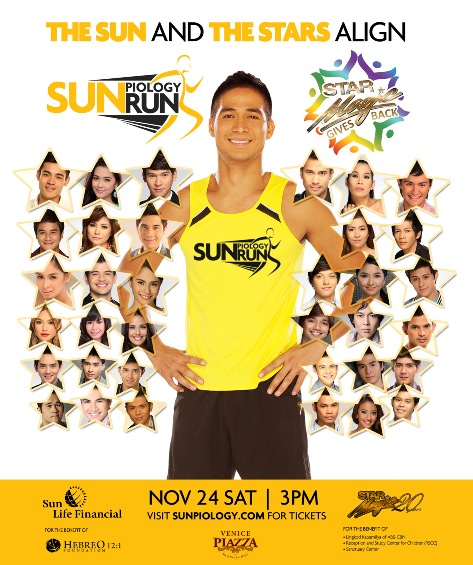 I’m really happy that the Sunpiology Run returned for a second edition this year. I enjoyed last year’s race despite needing to leave for a work thing and missing my own third place awarding. (Check out last year’s race report.)

This year’s Sunpiology Run (featuring Sunlife Financial ambassador and actor Piolo Pascual) will be held on November 24 at the Venice Piazza, McKinley Hill. This is on a Saturday afternoon. The race features a 1K (for kids only) and the signature Without Limits distances 3K, 6K, and 12K. Reg fees are P200 for 1K, P800 for 3K or 6K, and P1000 for 12K. While this seems pricey, all race registrants (except participants in the 1K) also get admission to the Star Magic Gives Back concert which follows after the race. Concert-only tickets are valued at P500 for general admission, so if you run the 6K and attend the concert it’s like you only paid P300 for your race. 😉

While the Sunpiology Run benefits Piolo Pascual’s Hebreo Foundation (which sends poor but deserving students to school), proceeds from the Star Magic concert will be donated to ABS-CBN’s Lingkod Kapamilya, The Reception and Study Center for Children (a home for abandoned, abused, neglected, and exploited children aged seven years old and below), and The Sanctuary Center.

Race registration is ongoing at Toby’s (Shangri-la, Mall of Asia, and Robinsons Ermita) and RUNNR (Trinoma, Bonifacio High Street, and Alabang Town Center). If you’re interested in attending the concert only, you may also purchase concert tickets at these venues.

For more information, go to Sunpiology.com.