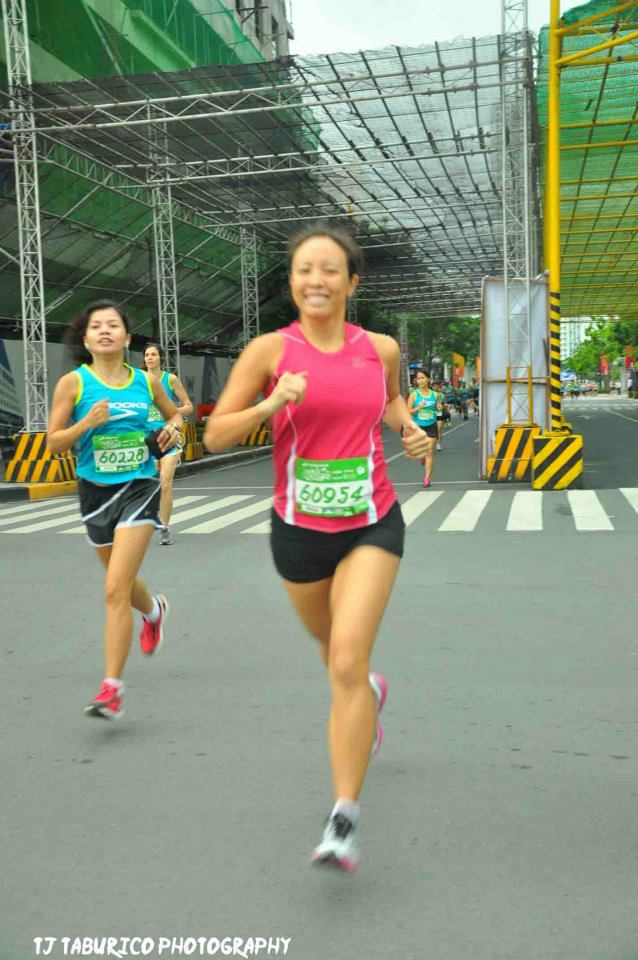 Based on informal chitchat with my fellow runners, I’ve come to realize plenty of people choose to move up to longer distances rather than try to get faster at the shorter distances. But fitness for distance running is made of both speed and endurance, and everyone needs to work on both to improve in this sport. In my years of running races, I’ve discovered easy ways to boost your speed on race day without (really) trying. I call it “free speed” because you get something for practically nothing. Try them out for yourself. 😉

Back in 2009 when I ran 10K at the Philippine International Marathon (a defunct race), I didn’t have a GPS running watch like my Garmin FR 110. However, I knew how to spot runners who have trained to run at a consistent pace. These are usually military-looking men who aren’t breathing heavily. If you can find someone like that who’s going at your pace or just slightly faster, stick close. Pick a spot behind them, or just at their shoulder.

One of three things is going to happen:

I’ve also been blessed to have a few fast-running friends who actively seek me out at races. If it’s one of their “recovery days” they usually “slow down” to pace me. Ate Mherlz Lumagbas who coaches for Milo and for RUNNR Academy did this for me at the Brooks Run, and I was really pushed to run hard because she took the time and effort to encourage me. 😉

It pays to look at route maps a few days before a race and maybe recon it if you’re not familiar with the area. You can strategize how to run a winding route most efficiently by running the tangents.

The shortest distance between two points is a straight line, so the shortest distance on a course is the straightest line you can create between the start and the finish while staying within the roads used for the race course. If you follow each street curve staying exactly the same distance away from the side of the road the whole way through, you take more steps compared to shaving close to the curve on a turn. If there are a series of curves on a winding (or S-shaped) road, you should look for the least curving way through.

This is legal because each race course is measured down the middle of its streets; that is its reported distance. It’s also why GPS watch users report a longer race distance in crowded races: they can’t dodge as easily between runners to follow the tangents, and may even have to run on the outside edge of the turns when there are too many people on the road.

I love flyovers because you can freewheel down and make up the extra time you took climbing it. I also use downhills as a recovery period because of the lower effort needed to stay on pace. If you ever come across a route that has successive hills, the speed you pick up going down one hill can help you gain momentum to crest the next hill with less effort.

Some runners I once trained with had been taught the Chi Running method, which emphasizes a forward lean from the ankles. The greater the degree of lean, the more speed one could put on. They’d been advised to lean forward and attack, even on downhills.

Of course, this particular strategy is conditional on the degree of the incline. I ran hills in Pico de Loro during the Next Step Tri Camps, and we asked Coach Ani de Leon-Brown, an elite Ironman athlete, how she would handle downhills. She said if it were a gentle downhill, she would accelerate going down it. However, if it were a steep hill, she would save her knees and just go down at a controlled trot, or even walk it.

If you do end up trying one or more of these strategies, please come back here and tell me: do these get-fast-quick schemes also work for you? Or did you use them before, and how did that work out for you?

29 thoughts on “How to Race Faster Without (Really) Trying”