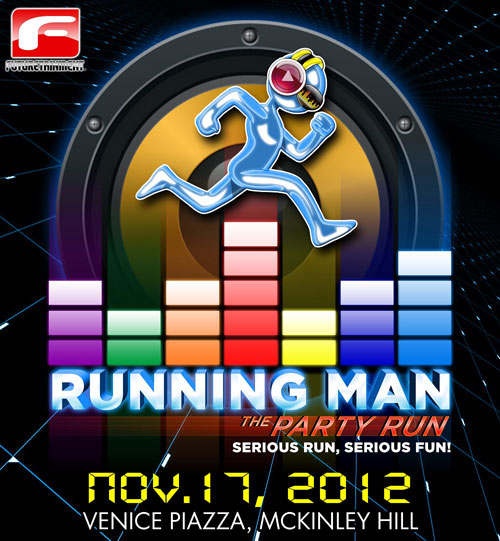 With the maturing of the running community here in the Philippines, I’ve seen a rise in the number of novelty runs where it isn’t just about the running anymore. We’ve seen night runs, costume runs, zombie runs, costumed night runs, trail runs, obstacle runs, trail obstacle runs, vertical runs… and the list goes on. With all this variety, runners are spoilt for choice, and to snag their attention (and registration) you’ve got to give them more to excite them.

The Running Man: The Party Run happening on November 17, 2012 wants to be that kind of run. It starts at 4pm on a Saturday, has a hardcore hilly route in McKinley Hill and a military bootcamp-style obstacle course. As day turns into night, The Running Man also promises a dance party all night long courtesy of DJ Funk Avy and DJ duo Deuce Manila.

This race is produced by Futuretainment, Inc., the events and multi-media company behind the concerts of Bruno Mars, Maroon 5, Black Eyed Peas and Miley Cyrus in Manila. This is their first venture into sports events and it seems they have a different approach to races.

P50,000 up for grabs at the Grand Raffle during the post-race party. #RunningMan

It's a limited-edition run because the area housing the obstacles will be turned into a condo building. #RunningMan

At P1,000, race participants get a 5K race with night-visible singlet and baller bands, fun obstacles, finisher medals and shirts, guaranteed loot bag, shower area to rinse off the guaranteed dirt and change into something more stylish, party access with two drinks, and a chance to win P50,000 at the post-race raffle. Participants will be released in waves from 4pm onwards. The party starts at 6pm (sundown).

This won’t be a timed race because the organizer’s goal is for each participant to immerse themselves into the experience regardless of their speed through the course. The top 3 finishers per wave still get a reward (gold medals) and bragging rights.

Part of the proceeds from the race will benefit Gabriel’s Symphony Foundation, which supports causes such as Operation Smile.