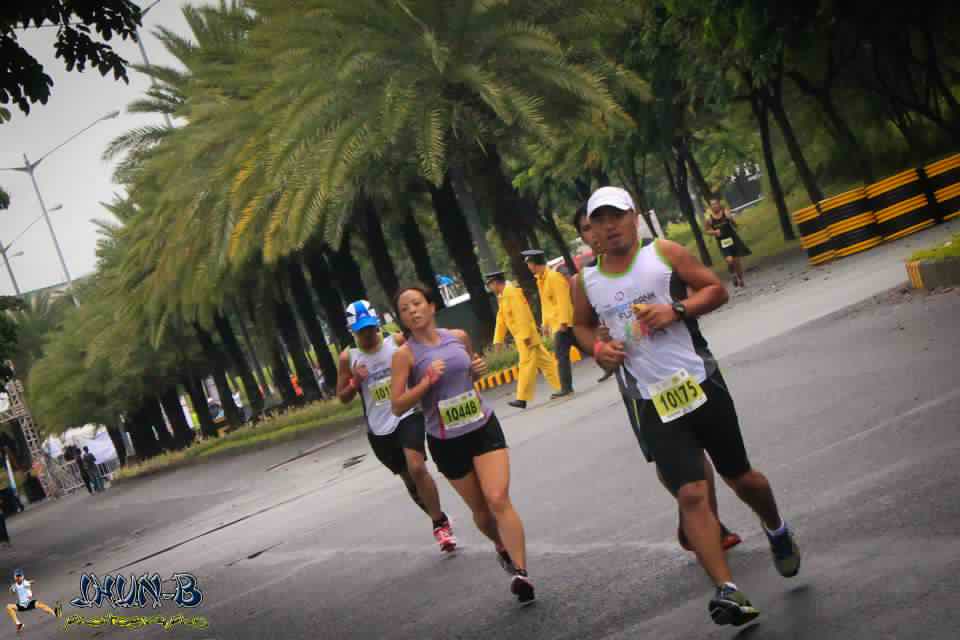 As the rain clouds rolled in last week, there were serious doubts whether any of the scheduled races on Sunday would push through. I went to Nuvali on Saturday for a scheduled bike ride and got drenched within the first five minutes of my ride. (I did, however, keep going for two hours before packing up and leaving for a taping.) Saturday afternoon I received news that the Kelloggs and WFF races were postponed. However, the BMAP Great Bank Fun Run was pushing through — I’d even been recruited to lead the warm-up.

Early Sunday morning I woke up at 2:30am to the sound of torrential rain. I fell asleep again, intending to wake up at 3:30 so I could be at Filinvest, Alabang by 5am.

I woke up at 4:30am (!!!), rolled out of bed and into my running clothes, and rushed out of the house. Thankfully, BMAP and Without Limits had decided to postpone the gun start for 10K to 6:30am to allow the weather to clear. I made it to the venue by 5am. I normally don’t warm up (I know, it’s bad!) but I really felt the need for it that morning as I led the runners in the warm-up; while it was no longer raining, the damp air allowed the cold to seep through my thin running gear right into my bones. BRRRRR!

The start was prompt, and soon enough the 10K runners were leading the first assault on the rolling terrain. We needed to do two loops of a 5K course to complete the distance. I had forgotten to charge my Garmin and hadn’t even brought my regular Timex watch, so I ran the race purely on feel (I feel cold, let’s take it easy, I feel good, let’s overtake this runner, I feel great, let’s run this motha…). trying to shave seconds off by running the tangents

Not only were there hills in the mix, but the curves on the course could add time spent running if you didn’t know how to run them right. I’ve mentioned running tangents before; the shortest distance between two points is a straight line, and each race course is measured on the shortest possible route. If you follow each road curve exactly, you take a few more additional steps compared to cutting close to the curve on a turn and making a beeline directly to the next curve. This meant crossing the road diagonally in some parts as a right curve would be followed by a left curve. That would have been trouble if there were cars on the road, but since the course was closed to most vehicles it was safe to run the tangents.

This strategy helped me overtake quite a few runners who were at my pace but were following the road curves too much. By the time we were on our second lap, I had put some distance between myself and other female runners. I was unexpectedly in second place!

It was here when the uphills became tougher as I started to fatigue. I relied on a few techniques I’d picked up from Pose (pick up my feet instead of pushing off) and Chi Running (short and upward arm swings on an uphill for additional momentum) and ran the hills strong. It also helped that coaches Ani and Dan had made us do hill repeats at the last Next Step Tri Camp I attended early in the month, conditioning my legs.

To cross that finish line and see the race clock ticking just past 49 minutes made me ecstatic. This was my first sub-50 minute 10K in more than a year. I was truly happy to be back in the game.

I forgot to mention that I bumped into Patrick Concepcion before the race started. He had taken advantage of onsite registration at the BMAP run because his scheduled run at the Kelloggs race had been canceled. If you want to get bitten by the running bug hard, read his blog! He’s super passionate about the sport lifestyle. Kikay Runner and the Running Shield

So I guess it’s safe to say I have been reunited with my first love, running. Triathlon is still part of what I do and I will be competing as a relay biker in two weeks at Ironman 70.3 Cebu, but I know where my heart truly is.

Honestly, I was going to cut the organizers some slack due to the weather conditions, but they didn’t need it. Rain or shine, the BMAP run was an excellent race. FIVE KIKAY PINKIE FINGERS out of FIVE!