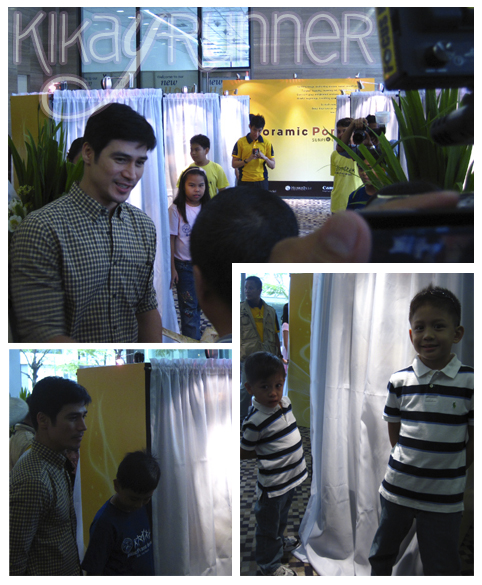 December 10, the day of the Sunpiology Run, was an extremely long day for me. Way before sunset, I was already at BGC waiting for the first of the Sunpiology events to begin. You see, it wasn’t just a simple footrace: to benefit the Hebreo 12:1 Foundation, there were three events. The first was the opening of an exhibit of paintings and photos by Piolo Pascual at the Sun Life Center; items would be auctioned online to generate funds for the foundation. Then the vertical run would start, taking participants up through the Sun Life Center’s stairwells. The 10K race I would be participating in was at the tail end of these festivities. And I had dance practice for work right after that. Piolo at the Sun Life Center with Hebreo Foundation scholars

Right after the exhibit opened, I had to get back home to retrieve my bib; after trying to pack my car that morning with everything I needed for the day, I had forgotten the one important thing! So, after slogging through holiday traffic, I finally got to the race venue at 4pm, 30 minutes before the race start.

Much as we “veteran runners” don’t want to admit it, a celebrity backing a race attracts plenty of newcomers to the sport. That this race was a sunset run also pulled in its fair share of people who want to try running but hate getting up early in the morning. So I overheard plenty of first-timer questions such as “Where can I leave my bag?” and “That’s the toilet?!” (referring to the portalets :P)

I hung out with Pojie while waiting for other 10K runners to assemble at the race arch. I overheard that Piolo had done the vertical run, so I carelessly blurted out to Pojie that I doubted he would run the 10K. A few weeks ago, one of the race organizers from Beyond Limits had asked me what my 10K PR was, and said he was looking for a pacer for Piolo. I hadn’t heard from the organizer since then.

So when Piolo stepped up to the timing mat holding the gun, I just had to laugh at myself. Feeling the competitive urge set in, I resolved just to try my best. This is our only photo together. LOL

The funny thing about that gun start is that when I heard the gun go off, I stepped out immediately. Then I realized everyone else was standing still, apparently waiting for Piolo to start. (Starstruck?) It took a split second for everyone else to get ahold of themselves and run.

There was one thing on my mind the whole time: “Lord, please help me run this 10K in 50 minutes or less.” It helped that the first kilometer of the race was downhill, so I could comfortably stay at a sub-5 minute pace without taxing my legs. Pink in a Sea of Yellow

For some reason, even though I’d been nursing a nagging cough for the past two weeks (I’m on antibiotics now), I felt much stronger and faster on my feet. Part of it was my warm-up walk from the Fort Strip, where I had left my car. Another thing that spurred me on was the knowledge that I had to be back at Fort Strip by 6pm for my dance practice.

At the fourth or fifth kilometer, a group of familiar elite runners including Coach Jojo Macalintal waved at me. I was already on my way back to the British School area while they were still on their way to the Bonifacio Triangle. At kilometer seven, I overheard someone say that Piolo was behind me — paced by that same group of elite runners. At the next U-turn, I spotted them closing in. Piolo and the Pack

As kilometers and minutes ran out, I willed myself to finish before him. I had already accomplished a sub-Piolo 10K last year, and although this was far slower than that, Piolo was still behind me.

I crossed the finish line in 50 minutes, 27 seconds. I received my commemorative Sunpiology pin, and the marshals took my name; I was the fourth woman to cross the finish line. I hung around, but not too close since a retinue of security guards had already formed a perimeter waiting to receive Piolo as he finished. As he arrived, I left the finish area to claim my loot bag, Powerade and Viva drinks, and to verify that I had not placed, since I needed to leave immediately.

Finally, the timing personnel told me I was in fourth place, so I left the race grounds just as night fell and post-race festivities commenced. I attended my dance practice which lasted until 8pm. Then when I checked my phone, there was a text from a photographer friend telling me I’d won third place. WHAT? What’s worse, it was Piolo who was emceeing the awarding, so he was calling out my full name and “Kikay” repeatedly. *facepalm*

This was a very well-organized race; Without Limits has redeemed itself in my eyes after the 500-Smile Run debacle. So, FOUR-AND-A-HALF KIKAY PINKIE FINGERS out of FIVE!

Though my kit was complimentary, I think I would have actually paid to run this race — just for the chance to run with Piolo. (Or should I say, run in front of Piolo?) 11 thoughts on “Sunpiology: The Day I Ran with Piolo”