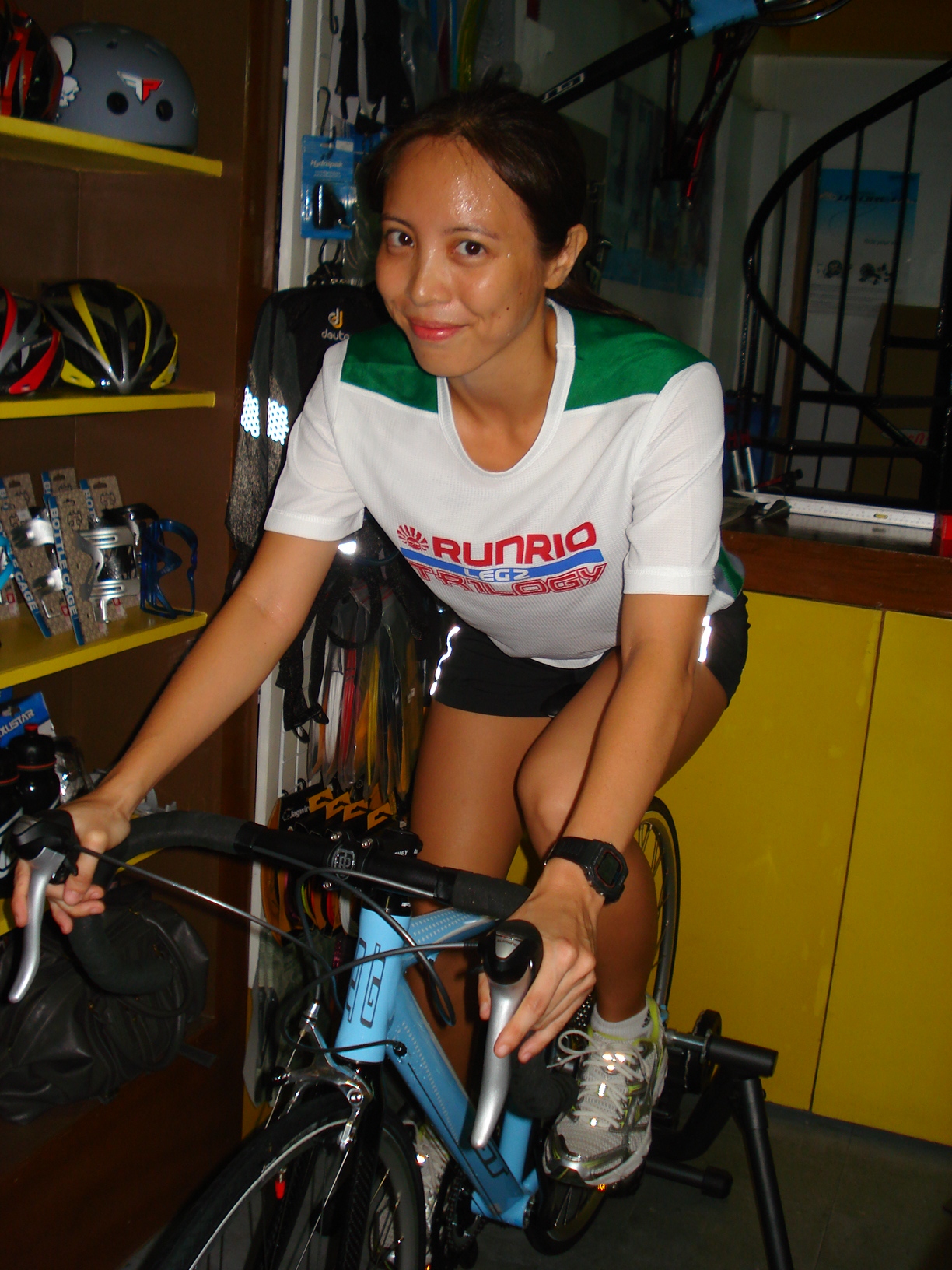 Joining my first triathlon last year wasn’t a big commitment. All I had to do was build up my stamina to swim 300 meters, borrow a bike to ride for 11 kilometers, and pray that my runner’s legs wouldn’t give out during the 2.5-kilometer run. But I knew if I wanted to get serious about things I would have to make an investment on my own bike.

It’ll be a year this December when I bought my first bike. Just like finding the right partner in a relationship, finding the right bike isn’t just a matter of going somewhere and picking the first thing that looks good. Gotta have some standards, you know.

Being a veritable newbie back then, I went to All Terra at Ortigas Home Depot where owner Edmund Mangaser and Alpha Training Systems head coach Andy Leuterio would help in the matchmaking. In order to do that, I would undergo a process called a “bike fit.”

According to Edmund, there are two schools of thought regarding bike fit: a static bike fit would take measurements of my body parts, compare them against a database of measurements taken from elite athletes, and generate some bike specs by which a bike could be built for me.

A dynamic bike fit, which is what Edmund would do for me, would take my measurements as a baseline and adjust bike specs to fit my fitness, comfort, and flexibility. The effects of training would eventually change the specs, and a bike we would select based on the initial bike fit should have enough room for such modifications and tweaking.

We first measured my inseam (the distance from heel to crotch) to determine bike size and saddle height. From the saddle I should be able to plant one foot on the ground without the bike tipping too far over, and off the saddle while straddling the bike I shouldn’t be in contact with its top tube (the bar running from the seat tube to the handle bars).

Then, using one of the shop’s bikes, the bike fit session commenced. Edmund asked me to pedal the bike on a trainer for several minutes as a warm-up. “Your bike fit is different when you’re cold than when you’re warmed up,” he explained.

He then marked my thigh, knee joint, and ankle with dots to measure the angles my legs were in at certain pedaling positions, using a goniometer to measure the optimal knee angle (at which my knee would have a slight flexion even if my foot on the pedal were at the 6 o’clock position). Elite athletes’ fitness and saddle time allow them greater leg extension, but since I was just starting out, Edmund dropped my seat height just a bit. He said, “What good is an elite-level bike fit if you can’t log saddle time because riding is uncomfortable?”

We took a look at the cockpit, which involves the handlebar, stem, and brake/shift levers. Andy asked me to shift my hands to the brake levers, then to the bar tops, then to the drops, explaining, “The ideal reach for a road bike is one that allows a slight, relaxed bend of the elbows whether you’re holding the drops, hoods, or bar tops. The bend allows for shock absorption while maintaining control.”

When the cockpit is too far away because the top tube or stem is too long for the rider, it affects control of the bike and causes strain in the back and neck. Andy continued, “The ideal height is one that allows you to breathe comfortably, yet not so high that you’re practically sitting upright and catching air [causing drag]. A lower cockpit reduces drag but may strain the neck as you would need to look up in order to see what’s ahead of you as your shoulders move down.”

A bike set-up for multisport also includes aerobars, which tuck the elbows under the body for better aerodynamics, improving performance during individual time trials. According to Andy, the ideal elbow angle should be at or close to 90 degrees from the side view. From the front, aerobar spacing should be close together for reduced drag, but not so close that to compress the chest and hamper breathing.

As Edmund set up the clip-on aerobars on the handlebars, he also raised the seat and moved it forward. He and Andy explained that without doing so, being in the aero position would change the angle of the pelvis and hips relative to the pedals, making it difficult to pedal efficiently.

Once we had the bike properly set up, I got back on and started pedaling again. I noticed how much more a part of me the bike felt. I could maintain my riding position without starting to feel the neck and shoulder pain I’d experienced during my triathlon on the borrowed bike (which we found out was too large for me).

With the proper bike fit and the store’s TV set showing footage from the Tour de France, I felt like I could ride forever. I was in love.

Unfortunately, it was time to break up the session, and I cast longing looks at the bike I’d used as I left the shop. But even if I wasn’t able to take the bike home with me that day, with the specs I had from my bike fit I found one just like it – and found love again. Me and Loki (photo by Edsel Ochoa)

This blog post is modified from an earlier version published in Total Fitness Magazine.