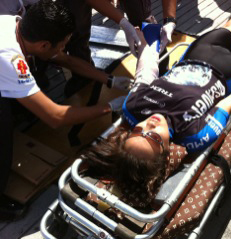 When you’re young and athletic, it feels like anything and everything is possible. You target bigger races and more difficult challenges, and you never think anything else could spoil your plans. You never think those horrible season-ending accidents could happen to you — until they do. Oh, my legs are perfectly fine, but as it happens you can’t really bike or run if one of your arms needs to be immobilized because you dislocated an elbow. (I’m typing this now with one hand from my “home office” AKA the dining table because I can’t drive anywhere else.) Let me back-track…

I was riding with my team on Daang Hari last Saturday in preparation for my bike relay leg at Tri United Matabungkay in two weeks’ time. I had stopped short of my required mileage because it was already scorching hot by that time.

I was pedaling towards the gas station to get some water. I slowed down to avoid a car exiting the station. I attempted to ride up the slope of the gas station driveway but didn’t have enough speed, so my rear wheel caught and I tipped over to the left. I put my left hand out to steady myself but regretted it immediately. My arm wasn’t designed to take that much force coming down on it, so my elbow buckled. my dislocated elbow (viewed from my bedroom window)

I screamed for help and my teammates plus a sizeable crowd gathered around me. I wasn’t in pain at first, but was afraid to move. So we waited there for an ambulance. It took an hour until one came from Cavite. Unfortunately they didn’t have the equipment nor the skills to move me.

My elbow started to swell up and I started to feel pain, even more so when the inexperienced people from the first ambulance tried to move me, grabbing my arm from the wrist instead of supporting the joint with a splint. I was screaming already but they didn’t stop until someone else told them to put me back down. Give me something for the pain. *

Thankfully one of the members from XTRM Tri Team called Lifeline, which has trained EMT’s and a splint for my arm. Look, they even have LV linens! *

I was transported to Asian Hospital where my parents (both doctors) met me and had me transferred to Veterans Memorial Medical Center, where my dad practices. There, I was put under general anesthesia and my elbow was put back in its place.

So, I missed my birthday run (Yamaha) and will be missing Tri United and some countless other races I’d hoped to join. My arm’s in a cast and sling for two weeks and I don’t know exactly when I can get back to work teaching exercise classes in the gym, much less do any training at all.

But you know, it could have been so much worse. I could have been run over where I fell. I could have broken my wrist or other bones (I’m so thankful for Calcium-Ade, a calcium supplement I take daily). I could have hit my head or suffered a spinal injury. So I thank God this is what happened. It’ll give me time to slow down and spend some time with God, family, and friends that I might have lost touch with as my life picked up speed.

When you keep succeeding at things you do, you end up thinking you’re ironclad and invincible. It takes things like this to make you realize how fragile, how human you still are, with feet (or arms) of clay.

(Many thanks to the members of Endure, XTRM Tri, Philip Castro and Iday Rosuman for all their help.)