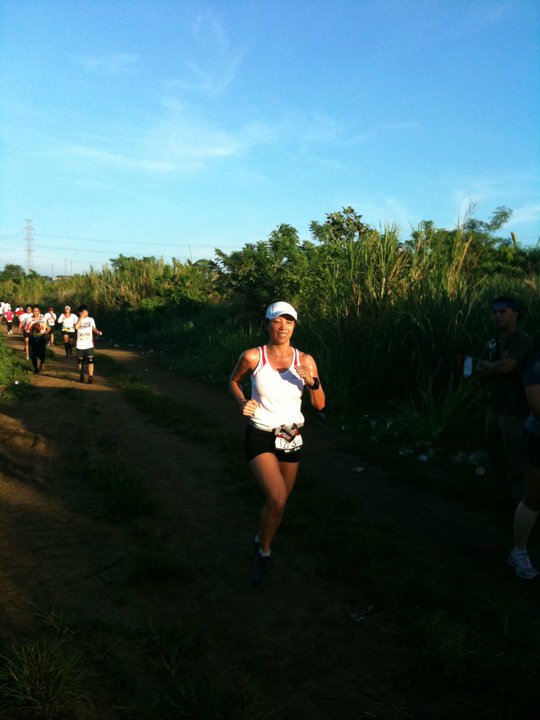 I always joke about how dirt is my Kryptonite, but it’s true. I am never at ease on trails surrounded by grass and trees. This comes from growing up in the urban jungle of concrete and glass. Still, I’m always up for a once-a-year challenge, and I got it when I hit the dirt at the Men’s Health All-Terrain Race 2011 on June 5 in Nuvali.

There are a few off-road races this coming weekend, but I chose the All-Terrain Race for my trail run because I did it last year, and I kind of have a title to defend. Although the distances offered for the trail run are different, this year I competed again in the shortest distance available (a 5K), seeking to place first again.

There was also a technical mountain bike course to be conquered, and for the crazy ones who wanted to, they could do both the trail run and the trail bike. As for me I think I’ll stick to my roadie bike.

It was a close-knit event; it seemed all the participants knew a few other persons; I think for a destination event such as this, most people register as groups so they can at least carpool to the venue and have some people to hang out with post-race.

I watched the 16K and 10K gunstarts (the 10K gun was fired by Rich Hardin, a Men’s Health cover guy and one of the winners of Amazing Race Asia). Then I sped off on my 5K. I had a few male model friends running with me who were sent by clothing sponsor Bo’ (which provided the event shirt). They raced off hot, but I knew better than to use up my energy during the first part of a trail race. Soon enough we encountered a steep and sandy descent. I was glad for my grippy trail shoes, which I got last year and hadn’t used since. Unfortunately they didn’t have the cushioning I’m used to from my Mizunos. (Remind me to pick up a pair of Mizuno trail shoes for next year.)

It was a simple there-and-back course, so the descent became an ascent on my way back. I overtook my friends and made my way to the finish line. It felt like I had taken such a long time, but it had only been less than half an hour.

Jinoe Gavan of Takbo.ph was one of the race organizers of the All-Terrain Race, and he was there by the finish line to give me the good news. “Congrats again,” he said. First place, defended! Thank you, Lord. 🙂 The Men’s Health All-Terrain Race stands by itself as a combined run-and-bike event. Who knows, maybe next year I’ll attempt the bike event. I give this race FOUR KIKAY PINKIE FINGERS out of FIVE.