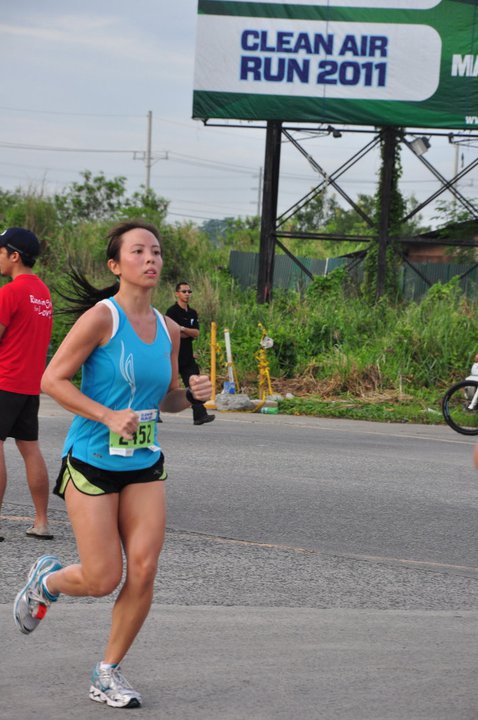 Two Sundays ago, I finally had the chance to experience a road race outside the metro. (Yes, I’ve raced in Boracay, but that was on the beach.) At the Greenfield Clean Air Run in Sta. Rosa, Laguna, I had traffic-free roads, wide open spaces, and best of all, fresh air to breathe. It was a race smaller than I’m used to, especially by RunRio standards. An hour before gunstart, I noticed some podium regulars like Cris Sabal and Luisa Raterta at the on-site registration booth. They were talking about the level of competition, noting that there weren’t any Kenyans in the 10K category. So, they registered in the same category I was racing in.

“Well,” I thought, “there goes first place.” I hadn’t trained for a sub-48 minute 10K, so I once again settled on a sub-50 goal regardless of where I would place in the field.

Once the gun fired, the fastest runners (including two women) put themselves far in front of us. I was in the chase pack, in distant third place. Still, as we came to the first turn-around, I saw the woman behind me and knew that if I could just keep my pace steady and no accidents happened, I had a guaranteed podium position.

The race wound around and around one of the real estate developments Greenfield is developing in the area, preventing any real acceleration on my part. I hit the halfway point around the 23-minute mark, but as I struggled to cover the second 5 kilometers in the same amount of time, I realized that going back there was a slight but steady incline — a false flat. Ouch!

I crossed the finish line in over 49 minutes, quads burning with the effort. But that was exactly what I needed to run away with the 3rd place medal. Ü

The Greenfield Run was a simple and well-executed race. I give it FIVE KIKAY PINKIE FINGERS out of FIVE.