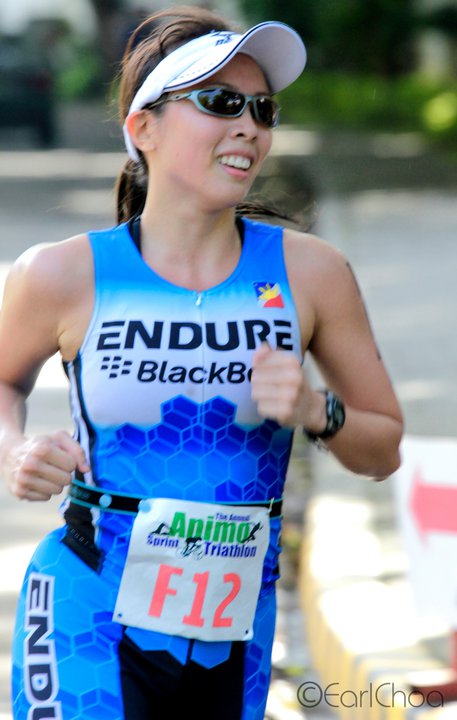 Even before I’d done my first sprint distance at SuBIT this year, I was already registered for the Animo Sprint Triathlon on June 12. I blame the early-bird discount on the registration fee for my itchy trigger finger. Never mind that the Animo sprint distance is 50 percent longer than the SuBIT sprint, involving a 900-meter swim, 30-kilometer bike ride, and 7.5-kilometer run. Gulp. Training went as planned, but I felt way more unprepared for Animo than I did for SuBIT, especially since I moved house during what was supposed to be my peak week for training. I definitely felt more nervous about Animo. Well, at least I had no jellyfish to worry about on the swim. in the middle of the pack *

I’ve always considered myself a good swimmer, but time and again I encounter women who trump me in speed. After our three 300-meter loops, I exited the pool in 9th place at 22 minutes 58 seconds. Off to transition I went for the bike leg: three loops of the Ocho-Ocho route. I knew I had a lot of catching up to do. The thing with the Ocho-Ocho in Ayala Alabang Village is it’s not an easy course. I’ve heard countless stories of people who had difficulty dealing with the consecutive uphill climbs and even worse, losing their way and not completing the required distance through the correct route. Thank God for a recon our team did a few weeks prior that firmly ingrained in my memory the route and how to attack it. Heading to transition and beyond! ^

That’s not to say my legs weren’t screaming with every push-and-pull; I felt impossibly slow and was only too glad to get off my bike after 1 hour, 8 minutes, and 30 seconds to begin my run. I tossed my helmet and bike shoes, pulled on my visor, and slid my feet into my Mizunos. I was home. Running is still my strength. ^

Because my legs were so heavy, I hydrated with some Lightwater, which has electrolytes to help fend off cramps. I kept a cap on my speed, scared I’d cramp up by opening up my stride too much. I just focused on a quick light step, praying for my legs to recover in time for a strong finish. I overtook women when I could, trying to climb up the ranking and hopefully snatch a top 5 overall place, not just in my age group.

The run route was the big loop from the Ocho-Ocho route, so it had sustained uphills and very few flats. Right at the end, about 200 meters from the finish line, I saw a woman ahead of me. I knew if i could creep up on her and if she had no juice left, she would have no answer to a sprint attack. That last corner before the finish arc, I made my move. I beat her to the finish line by eight seconds — good enough for fourth place overall! (Check out the rest of the Animo Sprint Triathlon 2011 results.)

If you place in the overall standings, you’re disqualified from winning in your age group. If I had just slowed down for a bit, I might have gotten a gold medal. Har har 🙂

I have to say that was my most painful triathlon experience ever — and that wasn’t even standard/Olympic distance! I have my work cut out for me if I want to do well in SuBIT standard distance next year.