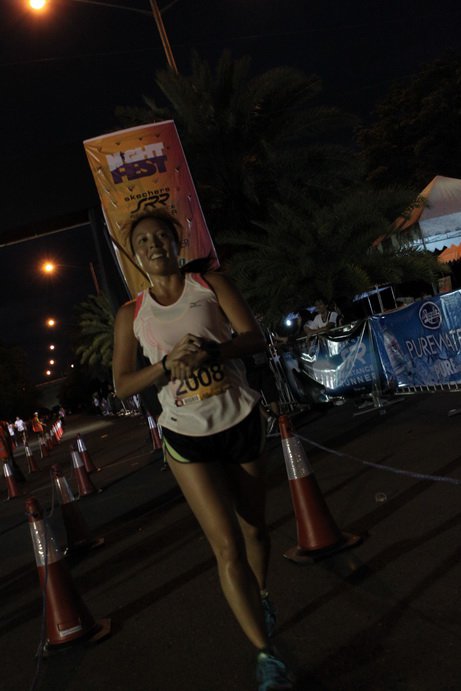 Coming into last Saturday’s Takbo.ph Nightfest, I had been frustrated the whole week in my attempts to get some run or swim training in. Then it rained on Saturday early afternoon, ending my plans of riding my bike in Filinvest before the start of the race.

It wasn’t such a bad thing, after all, since I wanted to be well-rested for what is only my fourth race of the year.

My last night race was at 2009’s Kenny Rogers Open and I must say I didn’t have such a good run then. I’m a solar-powered individual and although I conduct most of my run training at night, I always feel at my best in the early morning, which is when races are usually held.

What I enjoyed about Kenny Rogers Open then was that I could hang out with my friends at the venue to enjoy whatever post-race entertainment was there without being scorched by the sun, and this was also the case at Nightfest.

But I’m getting ahead of myself. I got to the race venue in Filinvest Alabang around 4:30pm (yes, early, I know!) since I wasn’t familiar with the traffic flow from up north to down south. Alabang isn’t as often used as a race venue as BGC because it’s quite far from central Metro Manila, and to access it requires toughing it out on congested service roads, or using a tollway. Still, when I got there many people were already walking about exploring the booths, having some snacks, and warming up.

I knew in advance that the Nightfest’s route was hilly. Since the 10K involved two loops of the 5K route, I had decided to race the 5K. While I know that I usually do better on rolling courses than flat ones, I didn’t relish the idea of doing the same hills twice.

Our gun start occurred while it was still light, but darkness quickly fell and we became reliant on street lamps and emergency lamps. As what frequently happens in 5K races, many shot off fast but were quickly winded even before 1 kilometer had passed. The really fast runners were able to maintain their pace, and I quickly lost sight of them.

I tried to keep a steady pace from the start so I wouldn’t burn out before we hit the hills. I took the uphills at a controlled pace, then freewheeled downhill to recover. It seems that was a good plan. The biggest uphill came around kilometer 3, and my legs still felt fresh although my lungs were bursting from the anaerobic effort.

I crossed the finish line at 23 minutes, 25 seconds. Hooray for new PR’s! Afterwards I feasted on a good dinner from the Aristocrat booth and sat and chatted with friends while the post-race program and awarding commenced. We ended the evening around 9pm to give enough rest time to those running the next day’s race. “Nightfest” lived up to its name. Ü

I rarely ever get to stick around post-race, so Nightfest was very enjoyable for me. The new PR was also a wonderful bonus. I give this race FOUR KIKAY PINKIE FINGERS out of FIVE.