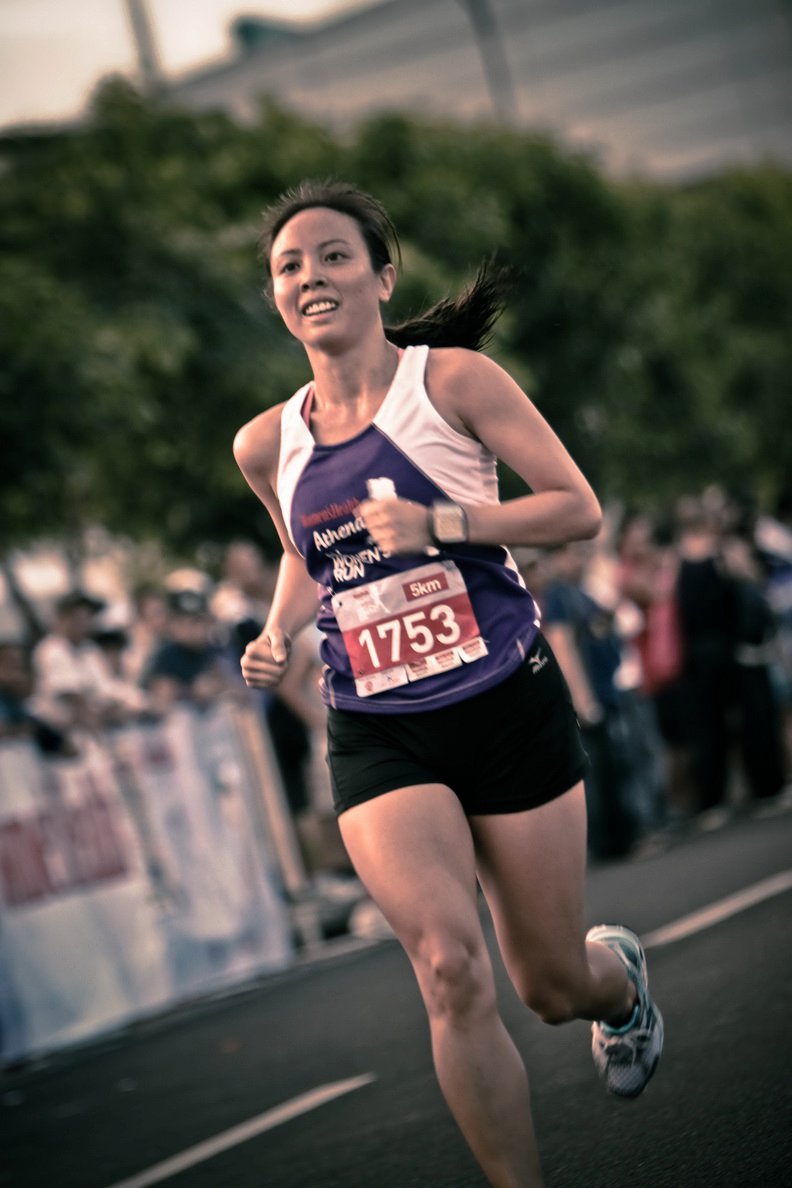 As a woman runner, I am in the minority during a regular race. There are always more men than women on the road, especially in the distance categories I join. The air during the start queue is thick with testosterone and man-smell (yes, men smell).

At the Women’s Health Athena All-Women’s Run last Saturday, only women were permitted on the road. How different would this race be? I arrived at the race venue some time around 5 a.m. While there were already some runners in the corral waiting for the 10K gun start, many preferred to wait outside the fences while their friends arrived. The air was thick with women’s chatter, but it seemed like everyone had their morning shower, as I didn’t get even a whiff of body odor.

There were men there, of course; dear husbands, devoted boyfriends, adik ka-barkadas and the occasional bystander lured by the prospect of seeing thousands of women all in one place. I heard one man remark to his friend, “Ang lungkot pala kung hindi ka tatakbo.” (“I didn’t realize it was so depressing not to run.”) Sorry, boys, this is our run. *wink*

After a functional warm-up led by BARRE3 instructors, the 10K runners were sent on their way, and 5K runners (including me) queued up.

The Athena Run was special not just because of its post-race goodies, like the Tiffany-type bracelet for 5K and 10K finishers and air-conditioned tent for giveaway collection. It also had a special rule stating that only women who were wearing the official race singlet would be eligible for the giveaways and for prizes. In short, wearing the singlet was required. So, of course, almost all of the participants complied.

At the 5K queue, I realized that there were not a few frequent podium placers among us. Then the gun went off, and away went four women ahead of me, two of them not wearing the singlet. I was a distant fifth-placer, but as Coach Rio drove up alongside me in his scooter (this was a RunRio-directed race), I told him about my concern. He told me to submit a written protest after I finished.

(Aside: Last year at Run United 1,  I came in third place but was almost disqualified due to an obscure rule that said Unilab employees and their family members were not eligible for prizes. I had actually given up my place then but since no one had protested, I was awarded anyway.)

Now all I had to do was hold onto my lead over the other thousand women behind me. *gulp*

I am Number Four

Less than a kilometer out, suddenly one of the women (not in singlet) ahead of me came to an immediate stop, looking sick. As Rio and the nearby marshals rushed to her aid, I sped on ahead. Now I was in fourth place.

With flat race courses like Mall of Asia, there are no downhills where you can recover and allow gravity to speed you onwards. You’ve got to keep pushing yourself onwards with your legs. Halfway through, I was breathless and my body was begging to stop. But the top three women were only half a kilometer away; I couldn’t let up. Blocking out the pain (photo by B.A. Racoma)

Somewhere around Kilometer 3 I realized how strange it was that I was the only one on the road (the lead women had vanished around a corner); even in past races when I was in the lead, there were always men running in front of and behind me. At the Athena run, there were no men who would suddenly put on a burst of speed once they realized I was running alongside them. There were no men who would make silly, rude, or lewd comments about women while I was in earshot. And while I usually latch onto a man’s pace in front of me during races, setting my own pace on that open road felt quite empowering.

When I finally crossed the finish line (still in fourth place), Rio was there waiting; as I gave my name to the finish marshal, he reminded me about my written protest and so off I went to look for a pen and paper. By the time I found Rio again, a line had formed of women waiting to take photos with him. He should probably have a booth of his own. Or maybe cardboard cut-outs of himself with which people could pose. Haha!

Apparently, they were being very strict with the singlet rule, as finishers from the 10K and 3K categories were also disqualified. Lesson here, kids: know the rules, and follow them. Otherwise, sayang! Still, I’d probably feel better about my podium win if I had actually finished in third place, rather than being bumped up because the first finisher was disqualified.

A women-only race is truly a special event on the calendar. I definitely felt an air of freedom about the whole thing. I’m also happy to report that there were plenty of women who made this their first race ever! It’s just wonderful to have a lot more women participating in this sport I love, in this sport which can be truly beneficial to a woman’s well-being.

I give this race FIVE KIKAY PINKIE FINGERS out of FIVE. Congratulations to Women’s Health, Athena Milk for Women, and RunRio for a great first edition. Hoping for a repeat next year!