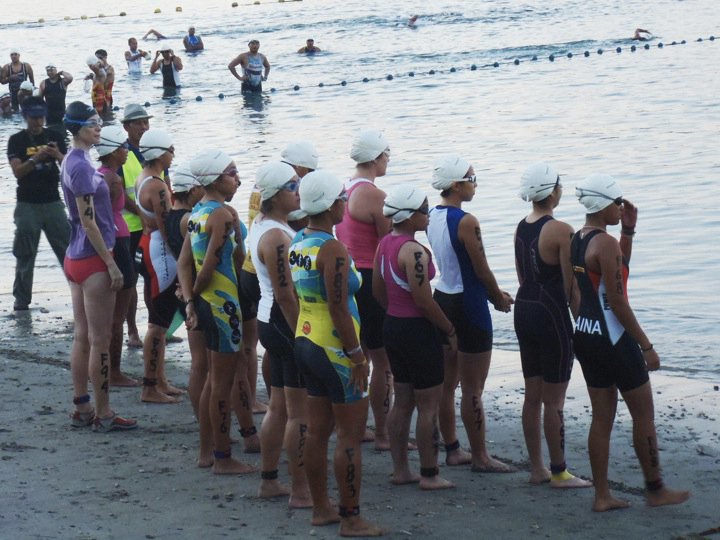 My team Endure Multisport has made the Subic International Triathlon our “A” race for the year, which means all of us who are members have to join it. Prior to last Sunday, I’d only done one tri at the 2010 Speedo NAGT Ayala Alabang, and its conditions are vastly different from what I’ll experience at SuBIT.

That’s why I did the 2011 Speedo NAGT Subic last Sunday. Granted it was another minisprint just like AAV, but the other choice was standard/Olympic distance. I’m only targeting a sprint at SuBIT, and there were certain things that I hoped to accomplish by participating in NAGT Subic:

And so race day dawned. I had been in Subic for two days already, but since my car battery had discharged I couldn’t get to Dungaree for any practice swims. (Stupid me left the headlights on.) The only practice I got was a swim in the small cordoned-off warm-up section, and then we were called to our race briefing. After a few minutes, we were sent off for a washing-machine mass start. In the excitement I started feeling my lungs tightening up, leaving me gasping for air. I felt so unprepared! Since I didn’t want to suffer an asthma or panic attack, I flipped over on my back and did most of the swim with a backstroke. As a result, I exited the water in 5th place. “Catch up! Catch up!” (photo from Sarita T. Zafra)

At T1, I had a pre-choreographed routine which saved me seconds. No sitting. Drink, helmet, belt, socks, shoes, bike, GO!

I was third on the bike, but passed the second-placer because she was having a tough time pedaling. And I was paranoid about her passing me, so I kept pushing, staying in aero position and trying to keep my speed hovering around 28 kph. Finally I came back into T2 with about 5 minutes separating me and the first-placer. I had some catching up to do if I wanted to close the gap, but my primary focus for the first half of the 3.3-kilometer run was to shake off the fatigue from the bike and keep a good stride rate. And then I saw the first-placer at the turnaround point; only 300 meters separated us! I attempted to sprint the remainder of the run course, and with a great big yell crossed the finish line 22 seconds after her. Truth be told, I didn’t know how to feel. I was happy to have secured a place on the podium and make my team proud, but there’s a certain disappointment you experience when you don’t equal a past achievement.

They do say, however, that you learn more when you lose. I’m going to make sure that come SuBIT the open water will not hold any terror for me. all winners, all smiles (photo by Marvin Opulencia)

Here’s a shout-out to fellow multisport blogger Chrys of Team Tri Mac, who won 3rd place in the minisprint in her first triathlon ever! (I’m shaking in my Mizunos now. Mamaw in the making! :O)

Team Endure did really well at NAGT Subic: Erick Guieb secured third place in his age group despite having done a 50-kilometer cycling race the previous day, and Ellen Encinares snatched victory from the jaws of DNF when she was the only one in her age group to complete the standard distance despite getting into a major bike crash. That’s the Endure spirit! Our other teammates Tati Dulalia, James Dulalia, and Pio Sugay finished their races strong as well. Many other teammates were on hand to support and give a helpful cheer, so I’d like to thank them, too. Z and Marvin for the encouragement at the finish line, Rico for checking up on everyone on the bike course, and Mama Let for the cheers at transition.

If you’d like to venture into multisport, why not start with a swim-and-run? Team Endure is organizing an Aquathlon on March 12, 2011 at Filinvest 2, Batasan Hills, Quezon City.

The distances shall be:

Download reg form and instruction for payment. Check out the run route and directions to the aquathlon venue. There are limited slots only, so register now!