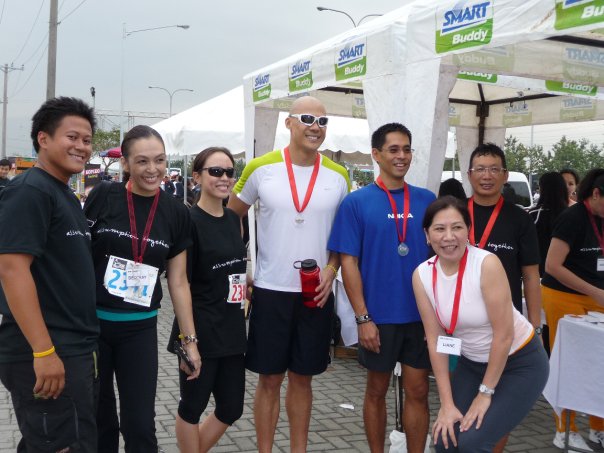 I bet none of you have realized this blog has just had its first anniversary. Yup! Kikay Runner has turned a year old, and for one of my celebratory posts I’ve got an interview with one running personality who has supported my endeavor from Day 1.

Even way before I started this specific blog, he encouraged me to run my second race ever. He’s the first ever person to Like my Facebook fan page (aside from myself, of course). At various times in the past year I’ve referred to him as Mr. F. Who is he? It’s probably an open secret, but here’s a pic of us together:

He’s in this picture!

My anniversary interviewee (and this blog’s first interviewee ever) is none other than Mr. Rovilson Fernandez. It’s pretty hard to miss him when he participates in races; he’s kinda like the male version of Tessa Prieto-Valdez, except instead of those unmistakeable tutus his trademark is his bald head.

Aside from being a runner, his day job includes running his mouth while standing in front of a green screen for QTV’s “Ang Pinaka“. He is also a National Ambassador for the World Wildlife Fund with best buddy and The Amazing Race Asia 2 partner Marc Nelson. He is probably as well-rounded as his shiny pate.

So, without further ado, on we go to the interview!

Noelle: Hey R! Thanks so much for agreeing to be my first victim — I mean, interviewee. How long have you been running?

Rovilson: First up. What an honor to be the first interviewee for the Kikay Runner experiment. So many fashionable runners out there (Iza Calzado, Tessa Prieto-Valdez, that guy in the red tights and cape [editor’s note: that’s the Runner’s Runner mascot], so this is truly epic. On that note, been running in organized races since the golden age of “adventure racing” (San Mig Light Enduro, AXN Challenge, Carerra Habagat). But running as the only discipline, 3 years now.

N: Has it always been part of your fitness regimen?

R:Yes, but only as a warm up. Engaging in a sport/gym “cold” can be dangerous.

N: How often do you run in a week?

R: Lately, due to my unforgiving schedule it’s been reduced to 5k jogs on the treadmill twice a week. Rugby practice on Wednesday, basketball in my village on Friday, then a 15K race on Sunday. Feel free to do the math for me.

N: Why did you take up running and what do you like most about it?

R: The camaraderie. Running alongside thousands of “like minded souls,” the collective energy is amazing. I also enjoy hanging out at the finish line cheering people on. Love hearing people tell me they’ve just ran 21k, or beat their best time, or set a new PR or finally beat “that guy” or just ran their first 3k. It’s refreshing. It’s inspiring, it’s the little triumphs, miracles and victories every Sunday that has me coming back for more.

N: How do you choose which races to run?

R: Distance and cause (charity event) are big factors. I also shy away from the “mega-runs” (races with over 10,000 runners). With that being said, of course, Coach Rio is a buddy, so I always support his events.

N: What’s your favorite race distance and what’s your PR for it?

N: Which is better for you: go fast, or go far?

N: You once mentioned to me you did a 42K once and would never do it again. What happened?

R: I was invited to run the Pasig Heritage Run as we were covering it for Gameplan. No training, improper equipment, I thought my athletic ability would carry me. Boy was I wrong. Seven dead toenails, bed-ridden for a week, bloody nipples, chaffed butt-cheeks and a “bruised ego” later, I realized, running a 42K is no joke.

N: Any pet peeves during races?

R: Hmm… at water stations, DO NOT stop and drink. Move to the side away from the path of oncoming runners who’ve mastered the art of “run, grab, gulp, run”.

Also, it’s called a race. Or a run. Leave the term “marathon” to those who’ve actually completed 42K.

Running is like driving — slower traffic on the right side. Stay in your “lane” and if you throw trash (discarded energy gels, bottles, banana peels, etc.) throw them near a trash can or where they can be seen and picked up by the race organizer clean-up crew. Be a responsible runner! Happy trails!