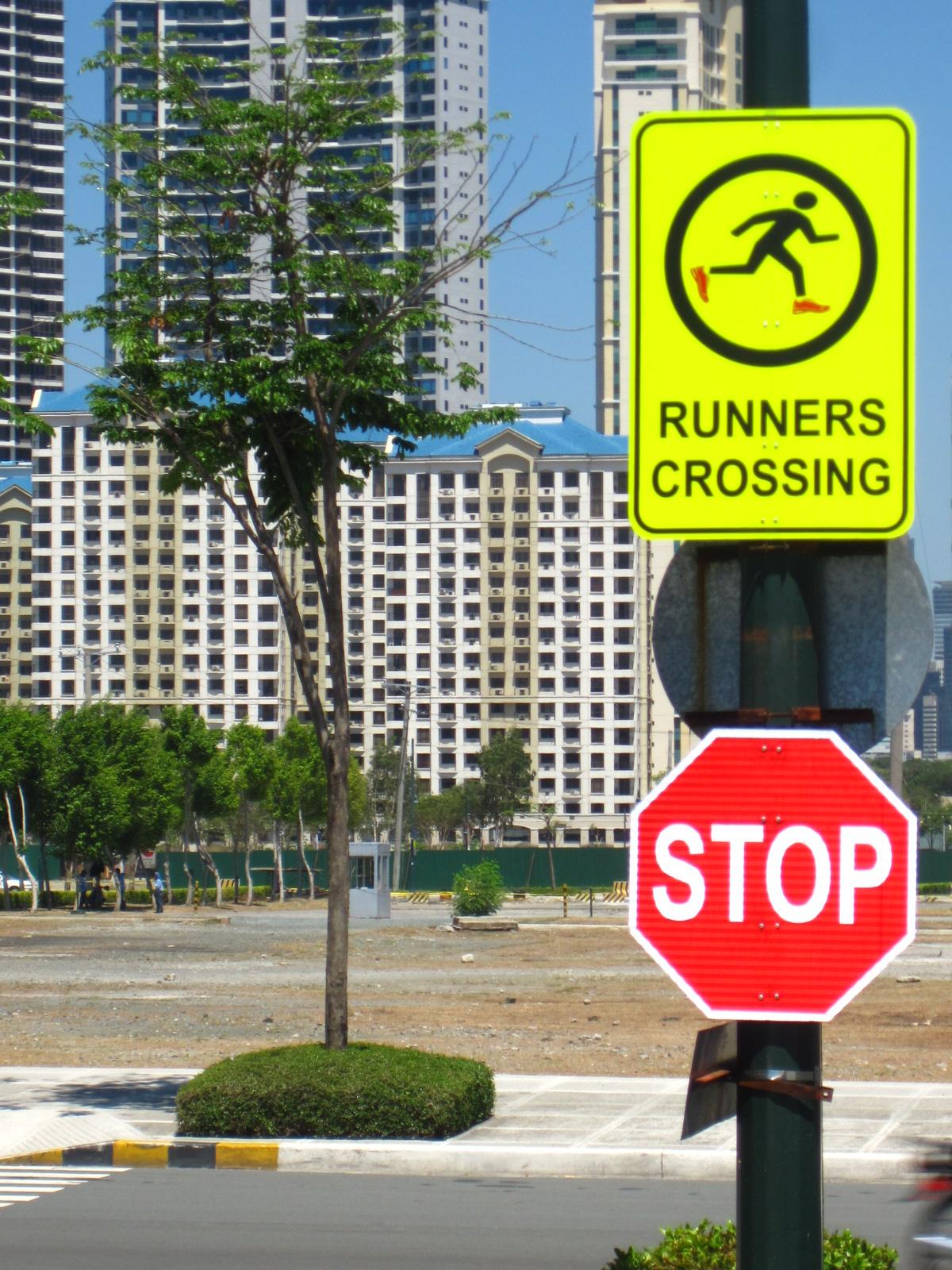 I remember when Bonifacio Global City, then called Fort Bonifacio, was just a set of lonely Army roads you could use to get to C-5. (Yes, I am that old.) I’ve seen BGC developed from open concert grounds into high-rise commercial and residential buildings. BGC has been the site of my training runs and races, and they’ve certainly incorporated running and outdoor activities into their real estate branding. But as the area develops further, can BGC still be called a runner’s haven?

the empty lot is now a construction site

There are roughly four areas runners use when they train in BGC: Bonifacio High Street, Bonifacio Triangle, McKinley Hill, and Bayani Road.

Many runners converge on BHS because of its familiarity and convenience. It is the usual site for running clinics and race starts, and its restaurants are always full after every weekend’s race. Athletic goods stores (RUNNR, Mizuno, Nike, and ROX, to name a few) are also clustered here. Its 1.25-kilometer perimeter is easy for runners to navigate and count. And just last year a runner’s lane was established using traffic cones.

Due to its popularity the problem you may encounter here is congestion. BGC has also put into place a new traffic scheme with stoplights at several corners of BHS. Runners are forced either to stop and wait for the pedestrian light to turn green (the light takes very long to change), or to inhale the exhaust fumes from cars at a stop light. Construction projects in the lots around BHS also introduce a lot of dust and falling hazards.

Composed of University Avenue and the British School area, this is where most races loop for a good kilometer. Its mild rolling terrain is perfect for building leg strength. There’s also a nearby convenience store (7-11) in case you need water or other food. The area is pretty well-lit and non-congested.

It may get a little lonely running the triangle loop by oneself though; not many runners pass the area. And if you bring a car, parking options are limited.

The lesser-known of the two race venues in BGC, McKinley Hill has the Venice Piazza and OneWorld Square as parking and dining options, and The Brick Multisport Store is also an attraction not just for triathletes but also for runners. McKinley Hill is (in)famous for two long uphill climbs: one from C-5, and the other from the McDonald’s branch.

Not many cars pass the inner streets within McKinley Hill, which makes it pedestrian-friendly and (practically) pollution-free. The roads tend to get dark late at night when the commercial establishments close, though.

This long stretch of road extending from its intersection with Lawton right past Heritage Park all the way to C-5 is a change of scenery from the manicured, developed areas within BGC. Bayani Road is a vestige of the old Fort Bonifacio, evident in the mixed bag of carinderias, car parts stores, and hole-in-the-wall restaurants that line it. In the mornings, plenty of people walk or jog around the extremely short loop created by Heritage Park’s two driveways, and a taho vendor always parks himself on the nearby corner.

Bayani Road is useful for tacking on additional kilometers to a long run without having to hamster around a loop too often. Unfortunately, as an access point to and from C-5, there are usually fast-accelerating cars and trucks on the road not used to giving way to pedestrians and runners. At night, the road may be pitch black in areas.

I usually pass through all these areas during my long runs in BGC, stringing them together to meet my required mileage. BGC is still a great place to run due to the varied scenery, rolling terrain (which has removed my aversion to hills and flyovers), and plenty of convenience stores to quench thirst. There’s still a bit more to work on, though. In BHS particularly, the developments have been going in the wrong direction, making the area less runner-friendly. Hopefully BGC listens to runners’ feedback and makes some according adjustments to validate its claim to be a runner’s haven.

How about you? What’s your experience with BGC as a runner’s training ground?