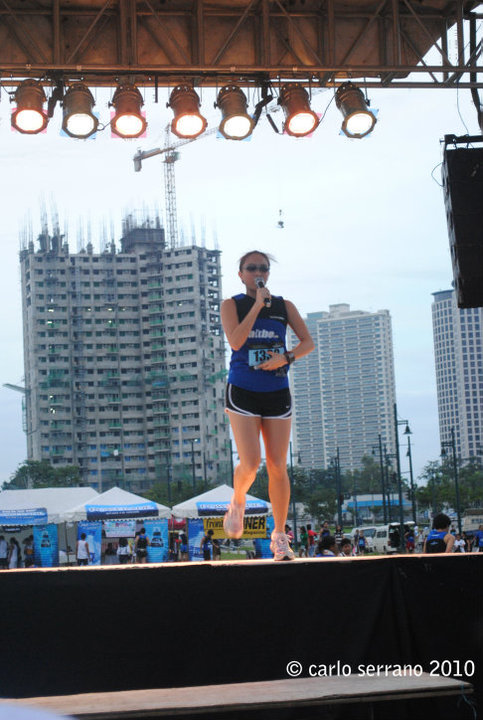 The TAKBO.PH RunFest yesterday was not just an anniversary fun run to celebrate the Philippines’ largest running community’s second anniversary. It was greater than that because it celebrated running, and showed that if you have the passion and commitment for running, you’re unstoppable.

When I sat down to write this post, I realized that it was also practically my first race anniversary yesterday. I started doing road races on July 19, 2009 at Globe Run For Home. It’s been such a ride since then; from being a lone runner, now I find myself surrounded by the like-minded, friendly individuals from the Takbo.ph community who love this sport and would very much like to see it continue to flourish and improve in this country. I’m honored to be part of it, even in a small way.

The gun start was scheduled for 6am, but I was already at the venue by 4:30am. Excited much? Yes, actually; not only were my friends among those who volunteered to help out at the RunFest, but I also had a bit part to play.

The race program was hosted by Mellow 94.7 DJ Chloe. It started off with the national anthem sung a capella by the Running Diva. (The national anthem was not performed at the Milo Marathon eliminations before the 42K gunstart, and I certainly felt that something was lacking then. I’m glad we had it in this race, as I suggested in the Takbo.ph forum.) Craig Logan of Team Logan led a heartfelt prayer and invocation. We had a moment of silence for the runners who had passed away in their pursuit of their running passion. Of course, our fearless and sleepless leader Jinoe also came up on stage to say a few words.

Then came my turn; I got up on stage, greeted all the 3,000-plus runners waiting in the corral, and started the warm-up. Yes, that’s right, I led the warm-up. It was nice using my job skills (as a group exercise instructor), and it’s my biggest class attendance so far. Heehee. 😀 After that, I joined the rest of the runners in the corral for the gun start.

I’d chosen to do only 5K, so I blasted off for a positive split with the lead pack. However, I wasn’t really planning to place, and when about four or five women sped of into the distance as I maintained a 4:xx min/km pace, I knew I was just in it to finish, hopefully with a new PR.

I’d forgotten how intense a 5K is, since I don’t have much experience with the distance. I started to breathe heavily, panting through my mouth as kilometer markers 1 and 2 flashed by. I caught up to the tail end of the 10K and started weaving through these runners. Prince, who was doing an easy 10K, decided to pace with me during the part where our routes merged.

Then, disaster struck. As I climbed up the British School hill, I spotted an open septic tank drain pipe jutting up out of the pavement. I moved to avoid it, but nearly collided with a 10K runner, caught my foot on the pipe, and fell. The momentum was so great that when my knee hit the road, my upper body kept going forward. So I tucked and rolled on the ground to absorb the rest of the momentum and avoid further damage to my knee.

Prince and I washed off my knee at the next water station, and then he had to leave because our routes diverged. I knew I had wasted precious seconds, but no matter; I would keep running. I finished in 24 minutes, 37 seconds (unofficial). That’s thirty seconds longer than my 5K PR. If I hadn’t fallen, maybe I could have beaten my PR. But it really didn’t matter; the race experience had not disappointed me.

On a side note, Timmy told me he’d never encountered a person who didn’t trip and fall after finishing a marathon. (Read about his own legendary fall. LOL) The race registration had been capped at a little less than 4,000 participants, which made it a more orderly, less rambunctious affair than the big races I’ve attended. Additionally, conducting registration far ahead of the race date, and promoting the race only on the Takbo.ph website and forum had inadvertently selected runners who were (as Abby Jocson called them) running adiks disciplined and willing enough to wait three months for their personalized singlets and race bibs to arrive, and informed enough to have some sense of runner’s etiquette.

I really noticed a difference in the participants at the run: they were warming up on their own pre-race, followed the marshals’ instructions during the race, and queued properly at the giveaway booths after the race. And then most of them stayed for the post-race program as well!

There was also a lovely sense of friendship and community, making for entertaining crowd participation and numerous photo ops.

I salute the TAKBO.PH volunteer marshals, photographers, support crew and everyone else who was involved in making this run so much fun.

I give this FIVE KIKAY PINKIE FINGERS out of FIVE. I can’t wait for TAKBO.PH to turn three!