Last Saturday as my sister and I were running around the UP Academic Oval, we encountered a woman going at a madcap pace and maintaining it. While I commend her for her speed and stamina, I couldn’t help cringing every time I saw her fast approaching me. It was almost like watching a train wreck in slow motion: it’s a disaster, but you’re transfixed and can’t look away. There was nothing odd about her — except it looked as if two tennis balls had been hung around her neck and were bouncing around under her shirt. Think Baywatch, except no swimsuits and there’s a silicone drought. 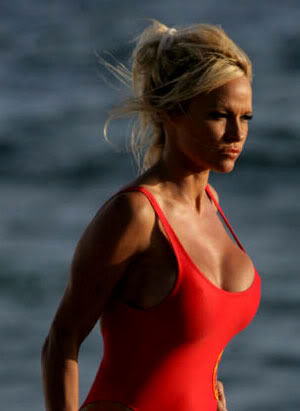 So it’s not Baywatch.

I know feminists burned their bras back in the 1960’s as a sign of protest against male oppression, but that doesn’t mean bras don’t have a use, particularly in high-impact sports like running. Breasts are made of fat and connective tissue. Thin bands called Cooper’s ligaments hold breasts up, but motions such as running stretch these ligaments irreparably, causing breasts to sag.

This woman looked as if she were used to running bra-less, since the wave-like movement of her chest area didn’t seem to bother her. (I wonder if she experiences jogger’s nipple. *shudder*) Ladies, unless you’re remotely turned on by the idea of your boobs hanging to your ankles before you’re 40, you should definitely wear a bra on your runs. And I’m not talking about any ordinary bra; that’s why there are such things as sports bras.

Here’s how I pick my sports bras:

So, ladies, do yourselves a favor. Get a sports bra (or two, or three, or four, or more). I’m always on the hunt for one. Think of it this way: a good bra is like a best friend — close to your heart, and supportive through life’s ups and downs.

By the way, you can now become a fan of KIKAYRUNNER on Facebook so you can virtually keep up with me!